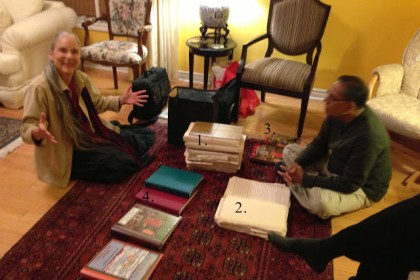 Earlier this week, Legend of Ponnivala creator and director Dr. Brenda Beck met with renowned author and literary magnate Mr. Appadurai Muttulingam at his home in Toronto. Mr. Muttulingam is a leader in the Tamil literary community internationally, having won several prestigious awards for his work. He is also a founding member of Toronto’s Tamil Literary Garden.

In the photo: Left, Dr. Beck. Right, distinguished Tamil author and founder of the Tamil Literary Garden, Mr. Appadurai Muttulingam.
1. The complete transcripts from Dr. Beck’s 1965 audio recording of the Annanmar Kathai.
2. The second version of the legend, which was dictated by the narrator and used for comparison with the original sung version.
3. Volumes One and Two of the complete Legend of Ponnivala graphic novel series.
4. Teaching materials and classroom guides for presenting The Legend of Ponnivala as an educational resource.

“Death and the Queen” well-received at MOSAIC