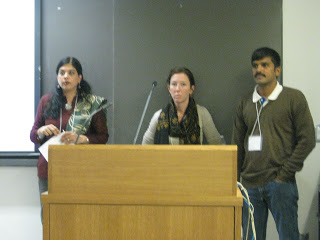 Finding time in her busy schedule, Brenda was able to make it to a couple of Friday afternoon sessions of the 2012 Tamil conference in Toronto. She heard several very interesting speakers who shared a panel that focused on Royal Lineages, History, and Heritage in the Kongu area of Tamilnadu (nearby Madurai was also included). This is exactly the area covered by The Legend of Ponnivala, and so the remarks made by the three speakers (S. Ponnarasu, Zoe Headley, and Gita Pai) were of great interest. The conversation and discussion that followed centered around the importance the people of this area give to a variety of strong mythical themes they feel tie them to the past. Of course this is exactly the kind of material The Legend of Ponnivala weaves around its heroes. After the presentations, several commentators pointed out the way in which images about heritage and culture often become embedded stories. Politicized tales and very grand epithets are often used in this area to glorify the heritage and local roots of certain well-known families and their lineages. All in all, these traditions make for very colourful story telling in Kongunadu!

Death and the Queen interviews on Tamil media in Toronto

“Death and the Queen” well-received at MOSAIC