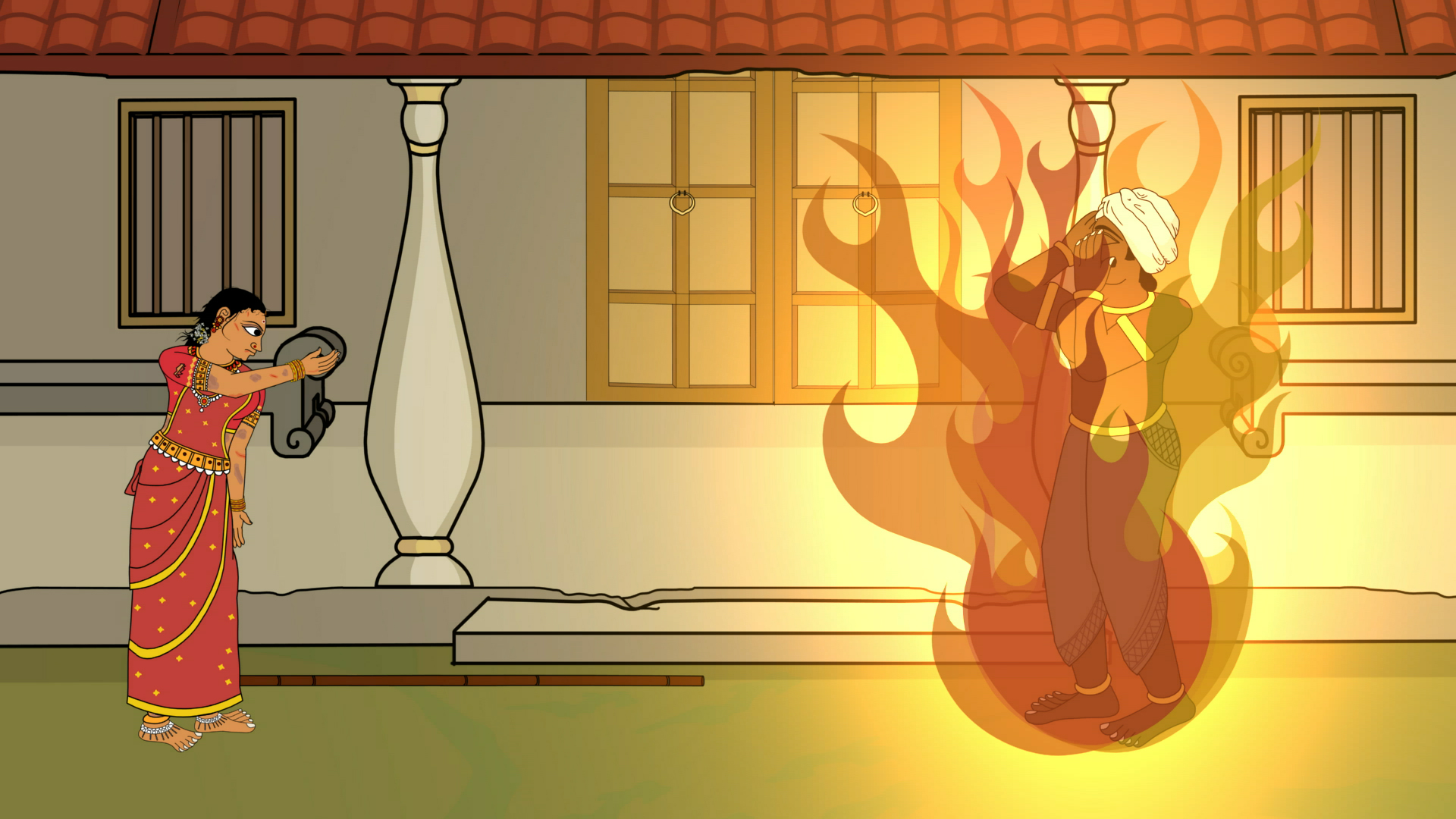 Here we see the heroine Tamarai throwing fire at her attacker, a palace guard. Both she and her daughter Tangal have the power to call a ball of fire to their right hand at will. This ability demonstrates the power of a woman to take control in a situation where she is deeply angered by an unjust act, one that has impacted her personally 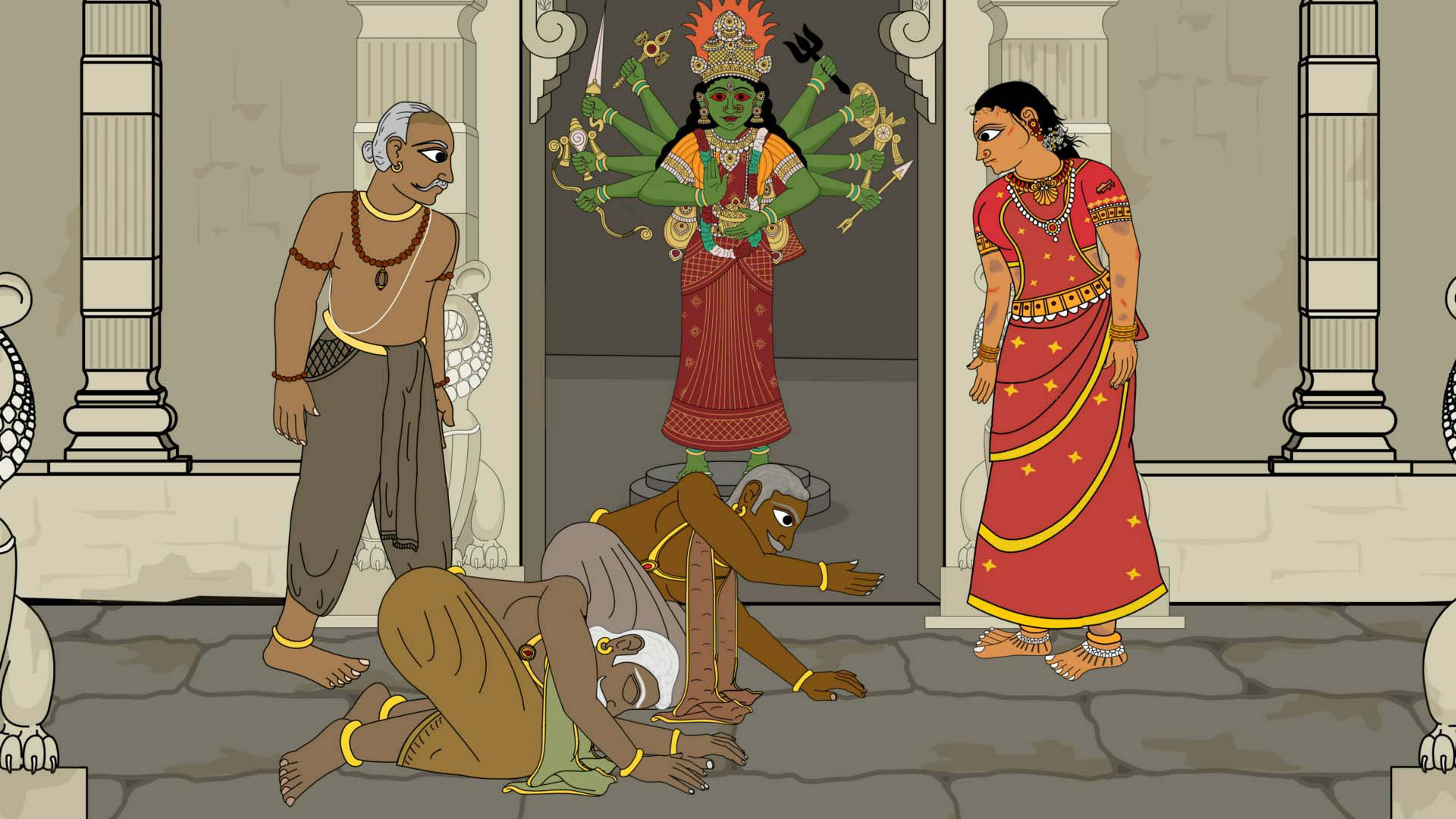 Here Tamarai’s anger at her brothers’ poor treatment of her abates as they personally bow at her feet to beg forgiveness. 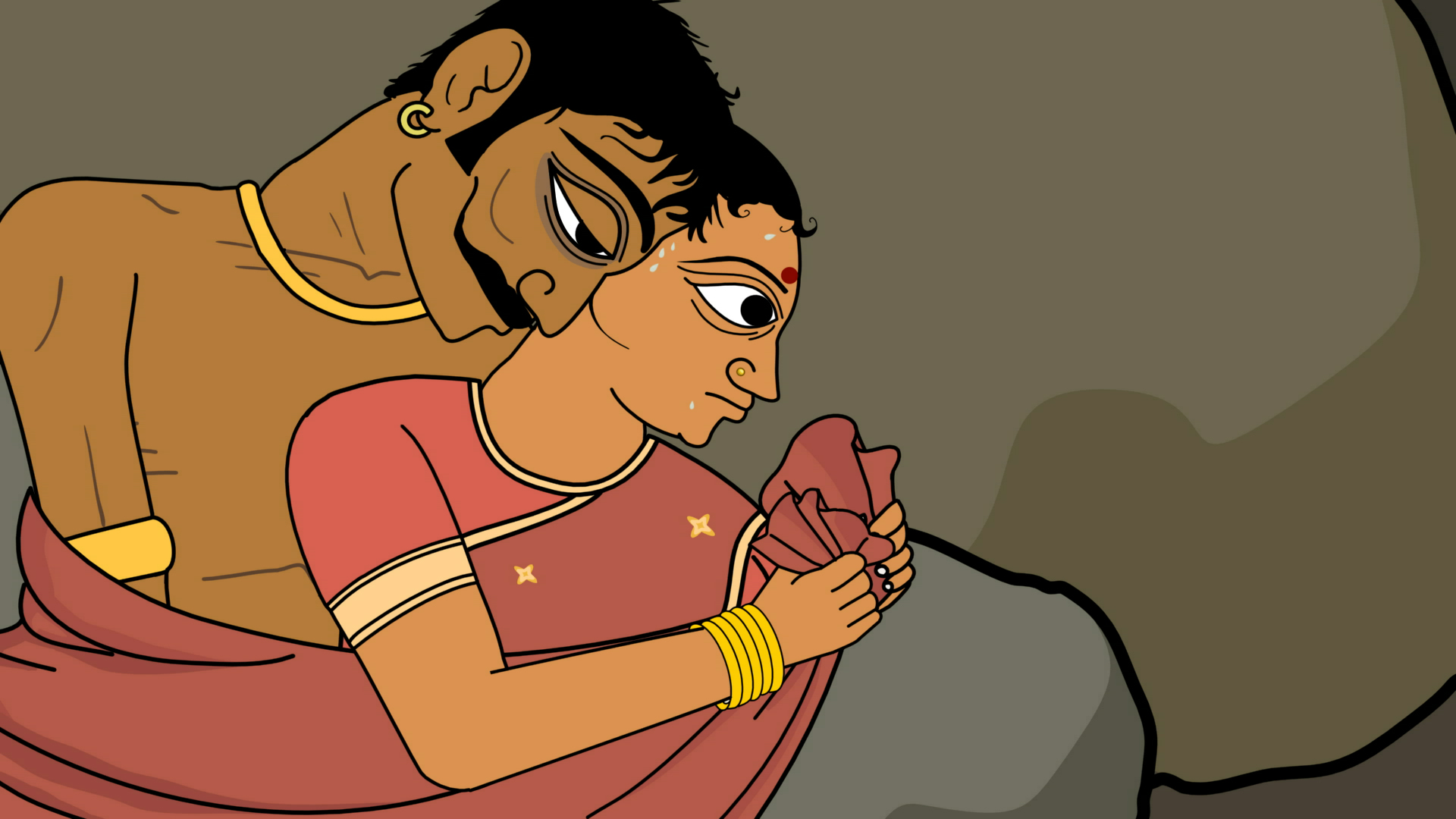 There are several points in the story where the woman is shown to be stronger and more courageous than the men around her. Here Tamarai undertakes to carry her own husband on her back as they climb up the Himalayas in an effort to gain an audience with Lord Siva himself. 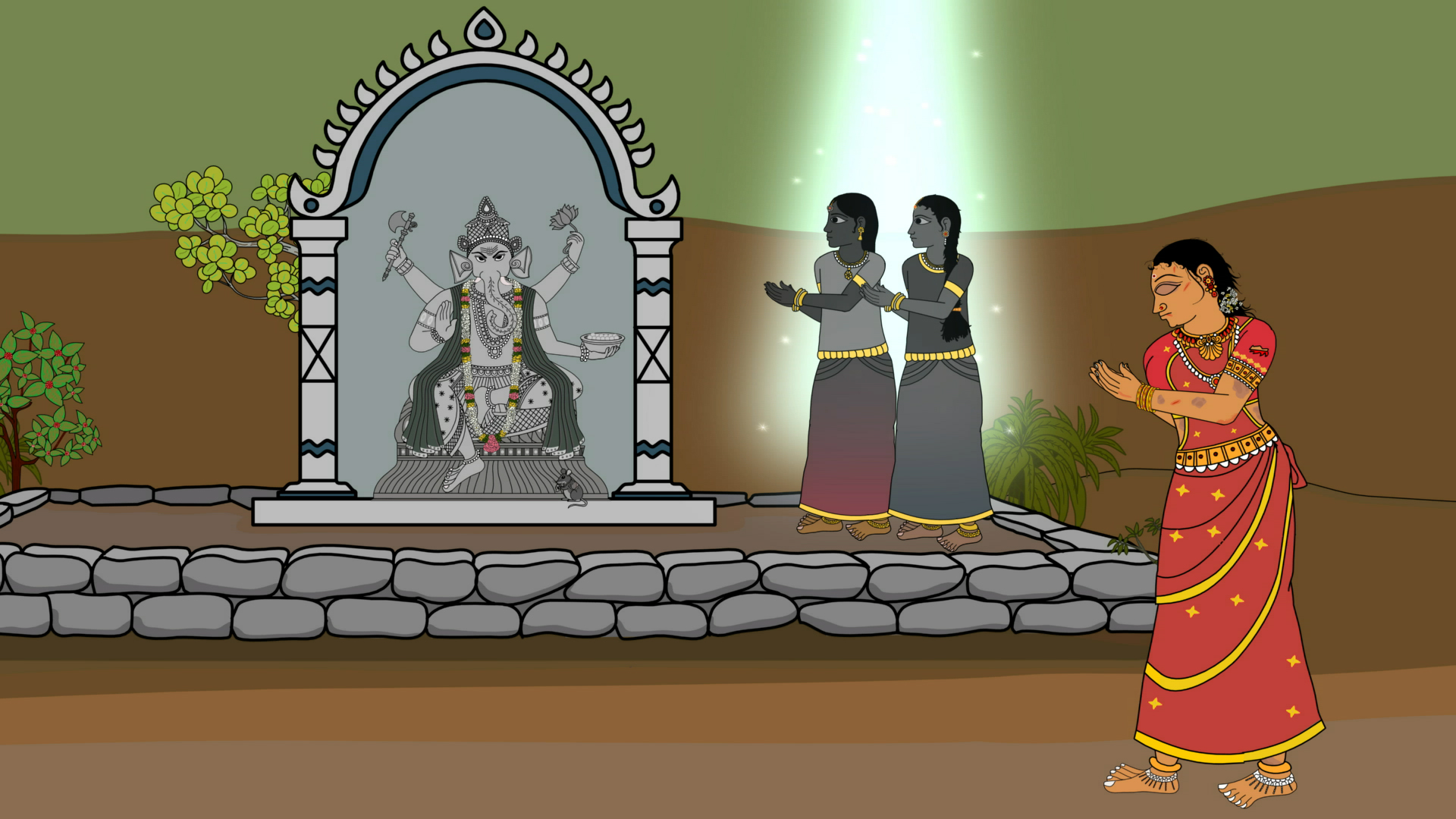 Tamarai has magical powers, one of the most important is the power to bring the “dead” back to life. Here we see her re-vivifying two young girls whom she earlier turned into stones. They are kept in this inanimate state until the moment Tamarai is ready to marry these young girls to her two sons. 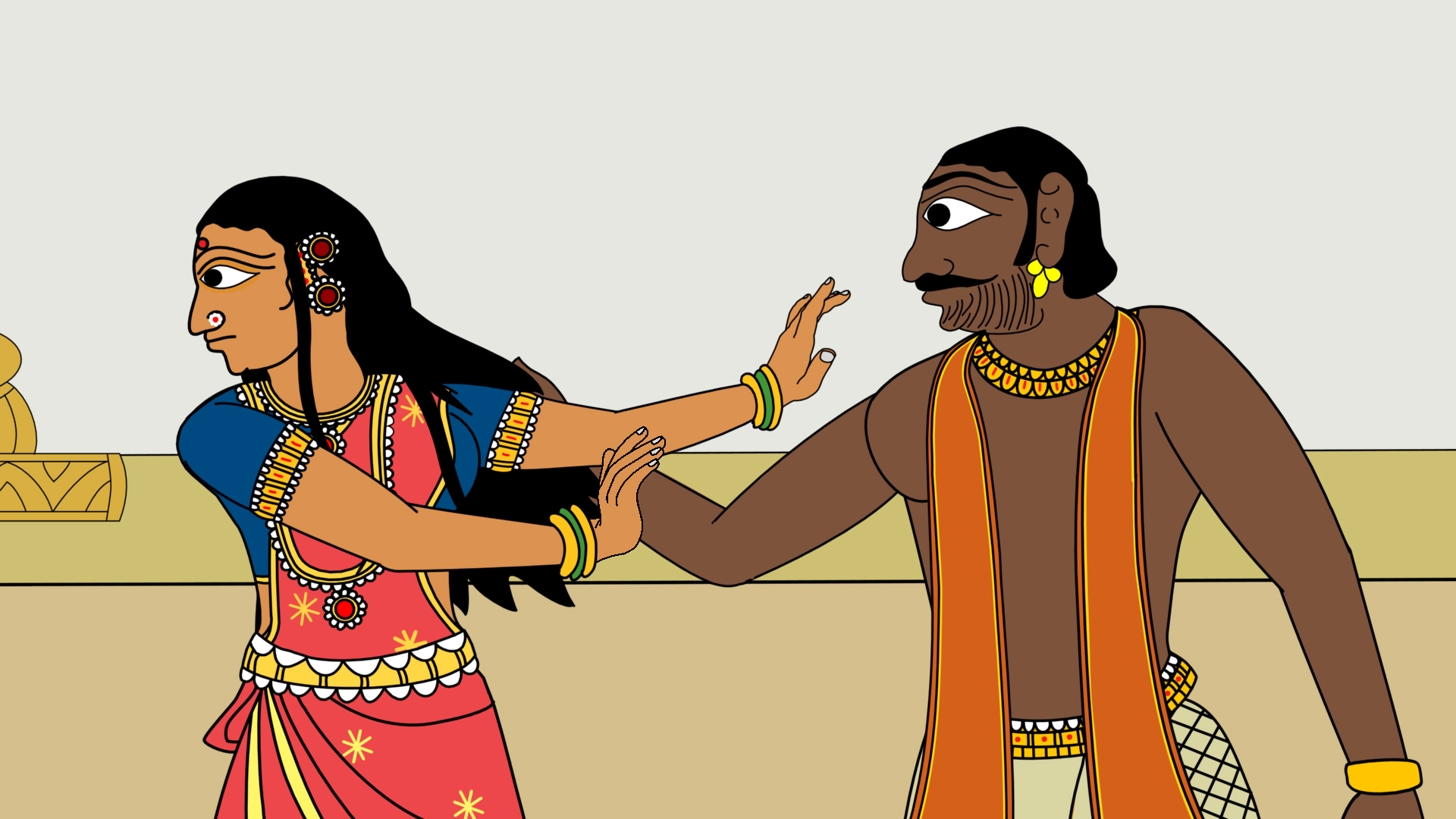 There is one place where the heroes’ male cousins attack his wife, showing that the physical abuse of women is not absent in the story. However, the chaste woman defends herself. Her husband arrives, however, and she is saved from any personal harm. Instead the two are forced to submit as one, and are then sent into exile together. There is an obvious parallel to be found in the Mahabharata story about Draupadi. 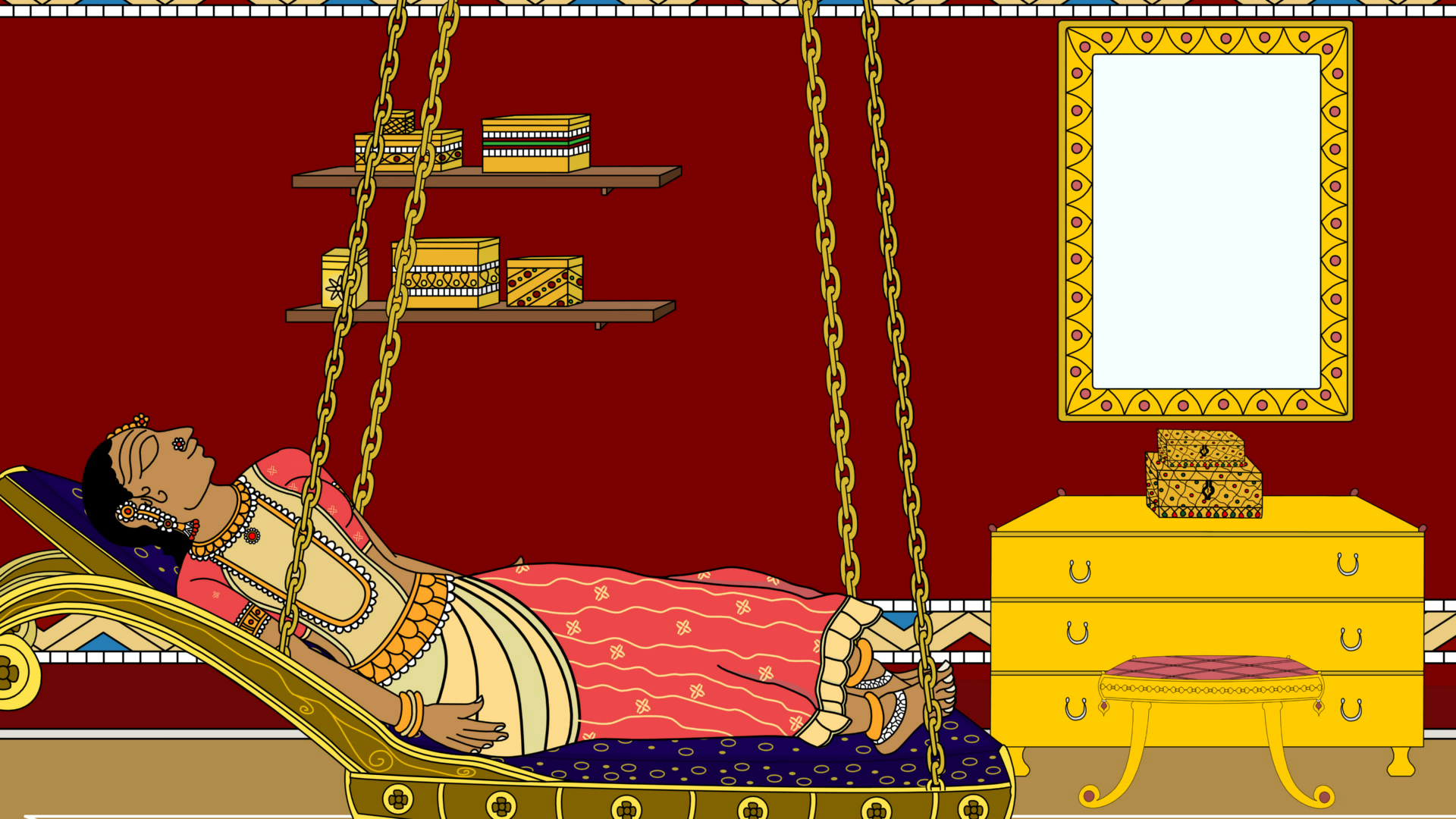 Tangal, the unmarried younger heroine, shows her power through her dreams. She is able to foretell the future in this way, and to warn her brothers of various types of danger that lurk ahead. 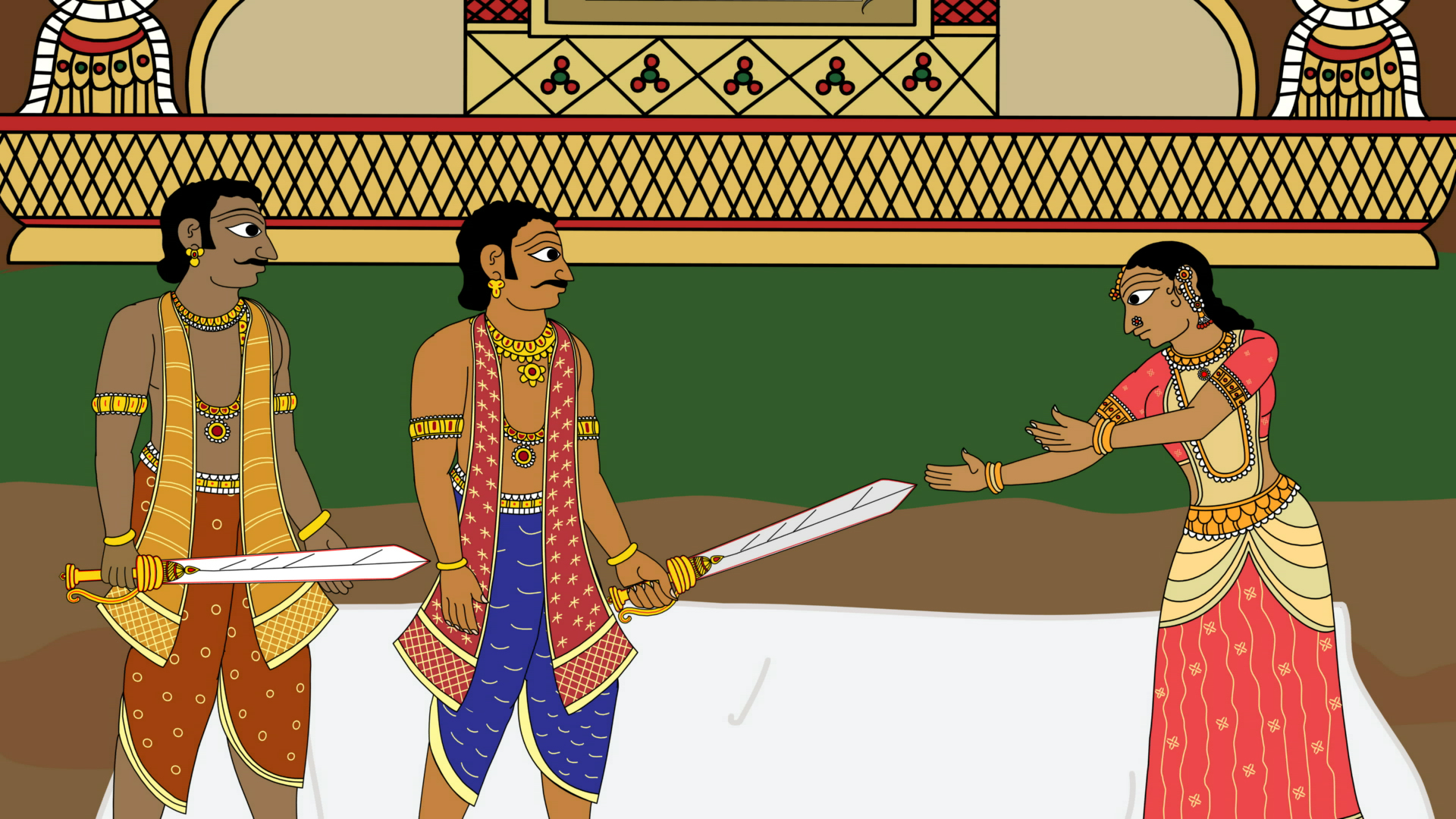 Here Tangal uses a magical “rite” to predict her brothers’ future fate. She has tossed a combination of mustard seeds and black pepper seeds into the air and how many they are able to sut in half with their swords predicts their fate in the battle that lies ahead. 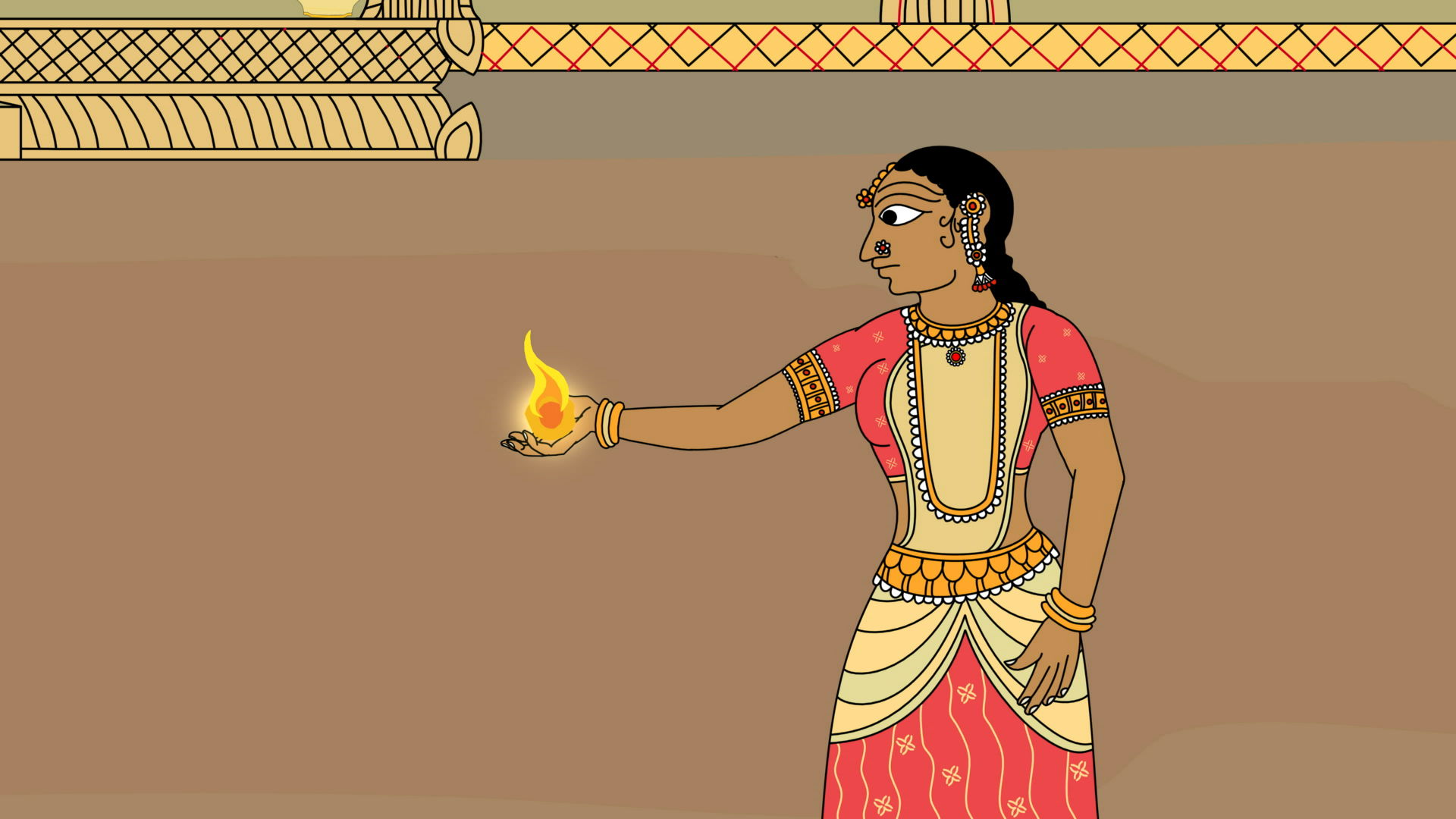 Tangal also has the power to throw fire balls, just like her mother once did. Here she is about to burn down her own palace home. She is distraught at the news (obtained through reading certain signs) that her two brothers have just died in a far away place. What is the use of their family palace now? 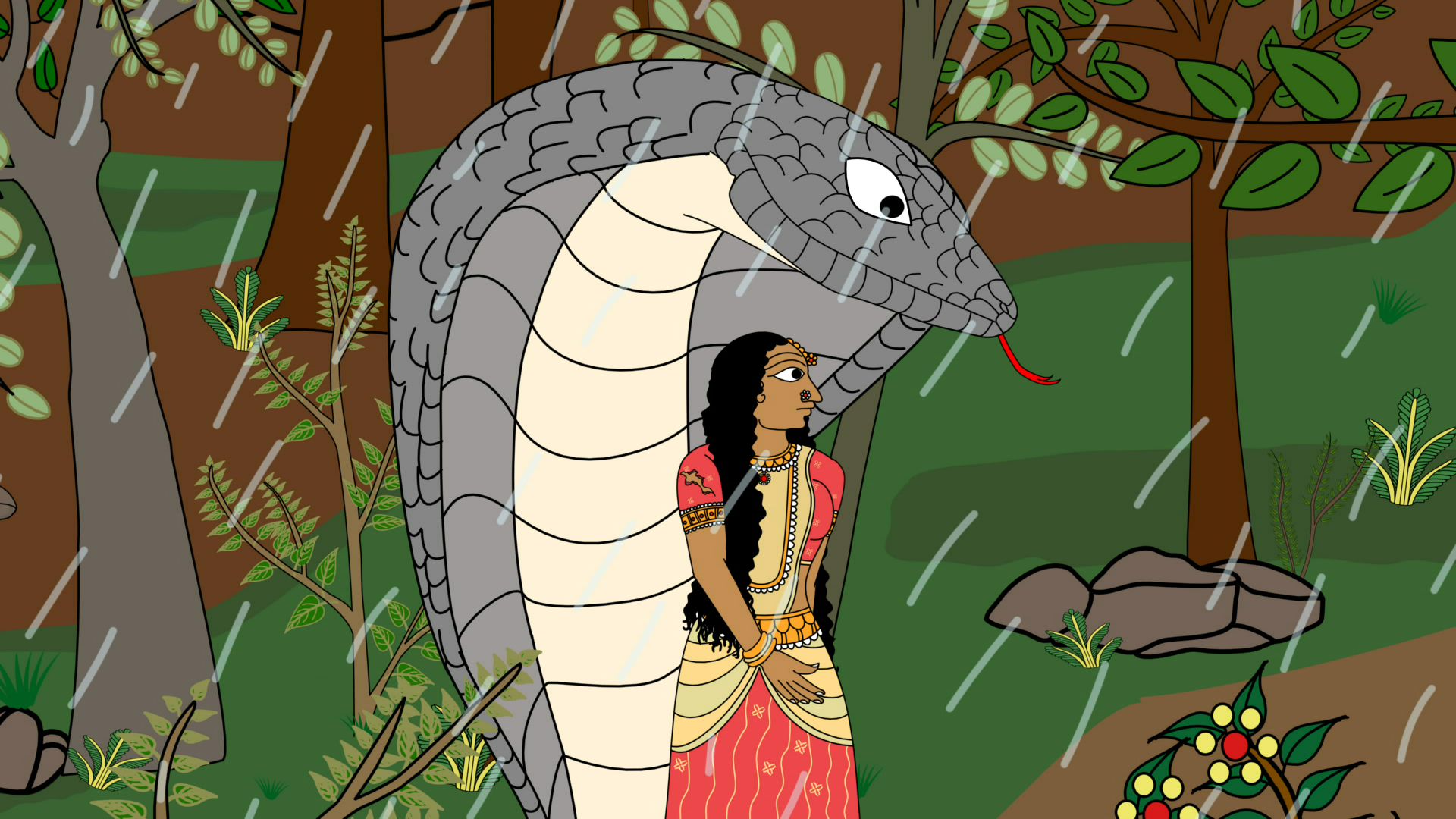 Tangal wanders through the deep forest in search of her brothers’ dead bodies. She has a special ability to speak with animals. Here we see that the King of the cobras has offered to be her friend, companion and protector. 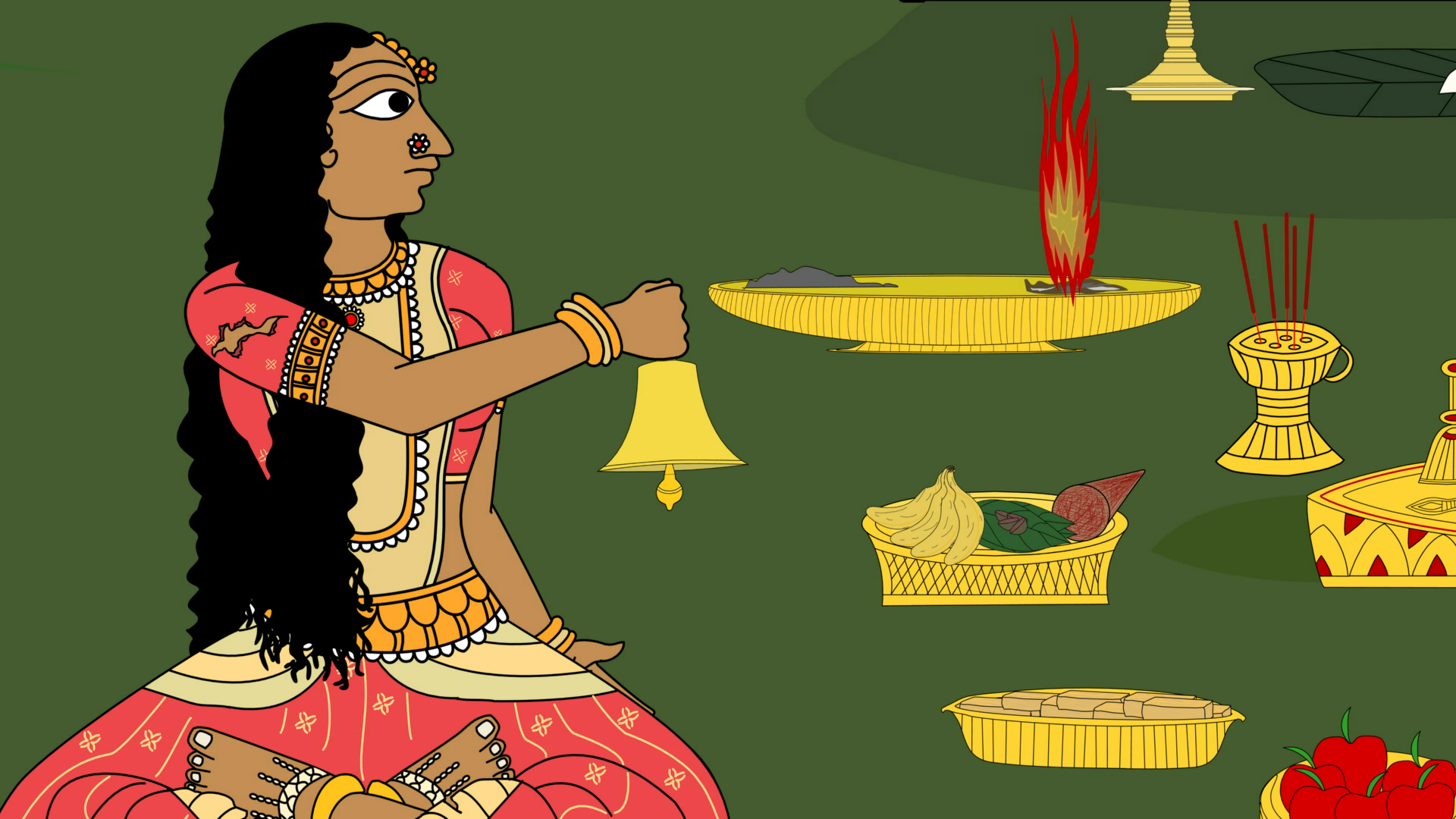 Tangal also takes on the role of a man after her brothers’ deaths. She is the one to perform a family funeral for her sisters’-in-law (whom she immolates) in another use of fire. Tangal also serves as the first “priest” at the shrine she has built in her brothers’ memory. Men traditionally serve as priests at such ceremonial locations.

Tamarai and Tangal are two very important heroines in the Legend of Ponnivala story.  Each abundantly demonstrates her independence, resourcefulness and ingenuity.  Both of these women are chaste and respectable, even to the extent that others describe them as goddesses.  These women’s adventures and personalities can be examined on many levels. One line of inquiry could be to compare them to women in the world’s other well known epics.   Certainly the complex roles deep involvement of women in The Legend of Ponnivala story far exceeds that of leading females in stories such as the Iliad where Helen of Troy is largely depicted as a beautiful object, a trophy to be captured and raped.  The closest parallel is likely found in South India’s famous Silapadikaram story where the heroine Kannagi functions as a strong character in her own right.  Certainly Draupadi in India’s Mahabharata and Sita in the Ramayana have strong characters” too.  But it can easily be argued that the women depicted in The Legend of Ponnivala outshine them both in their demonstrations of personal courage, fortitude and even in their broad display of magical power!