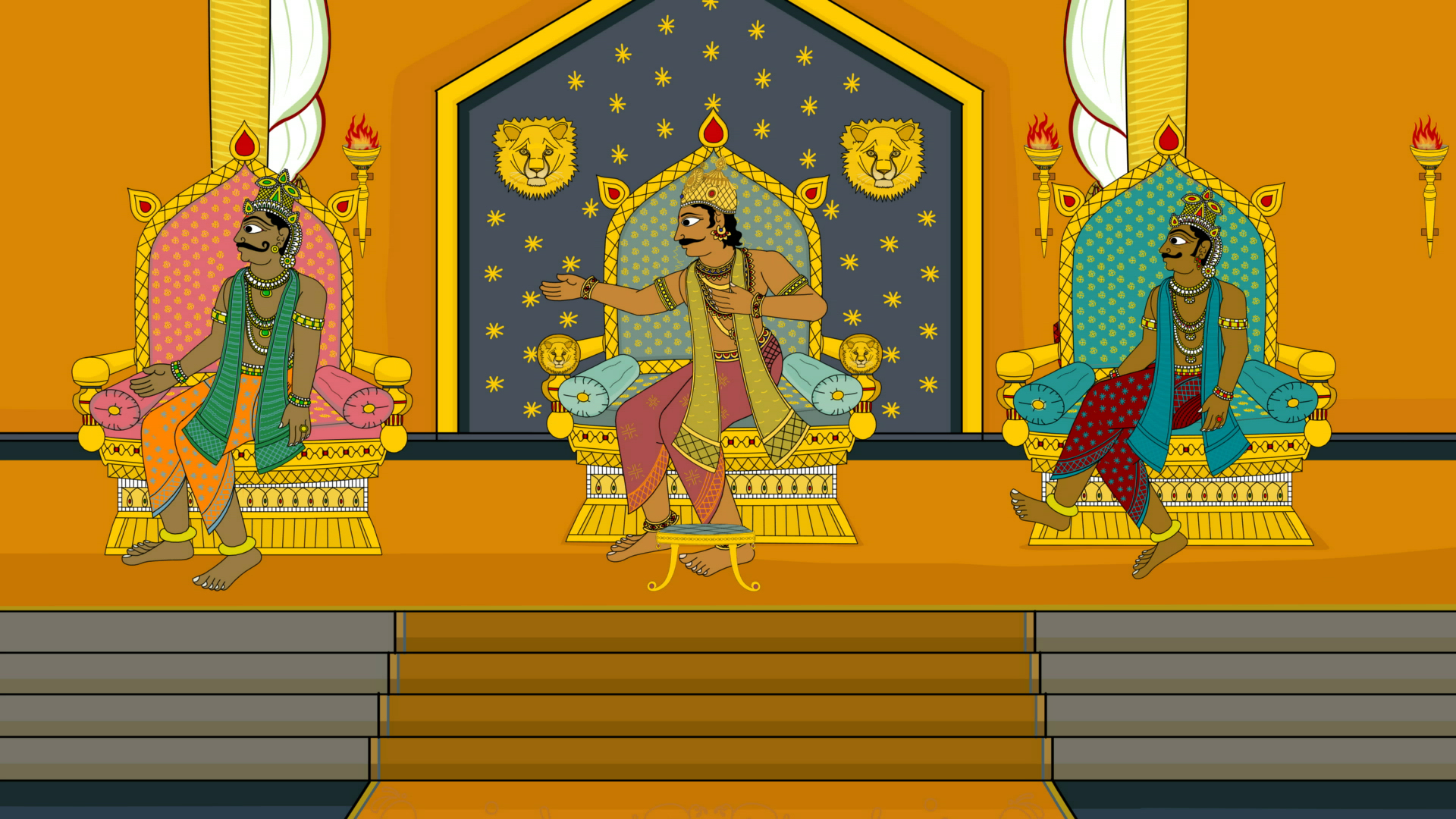 The conventional image of leadership stems from the power of the king. In The Legend of Ponnivala this king is an unnamed monarch who belongs to the Chola descent line. Here we see him in his audience hall, giving orders and announcing his decision in matters brought to him. 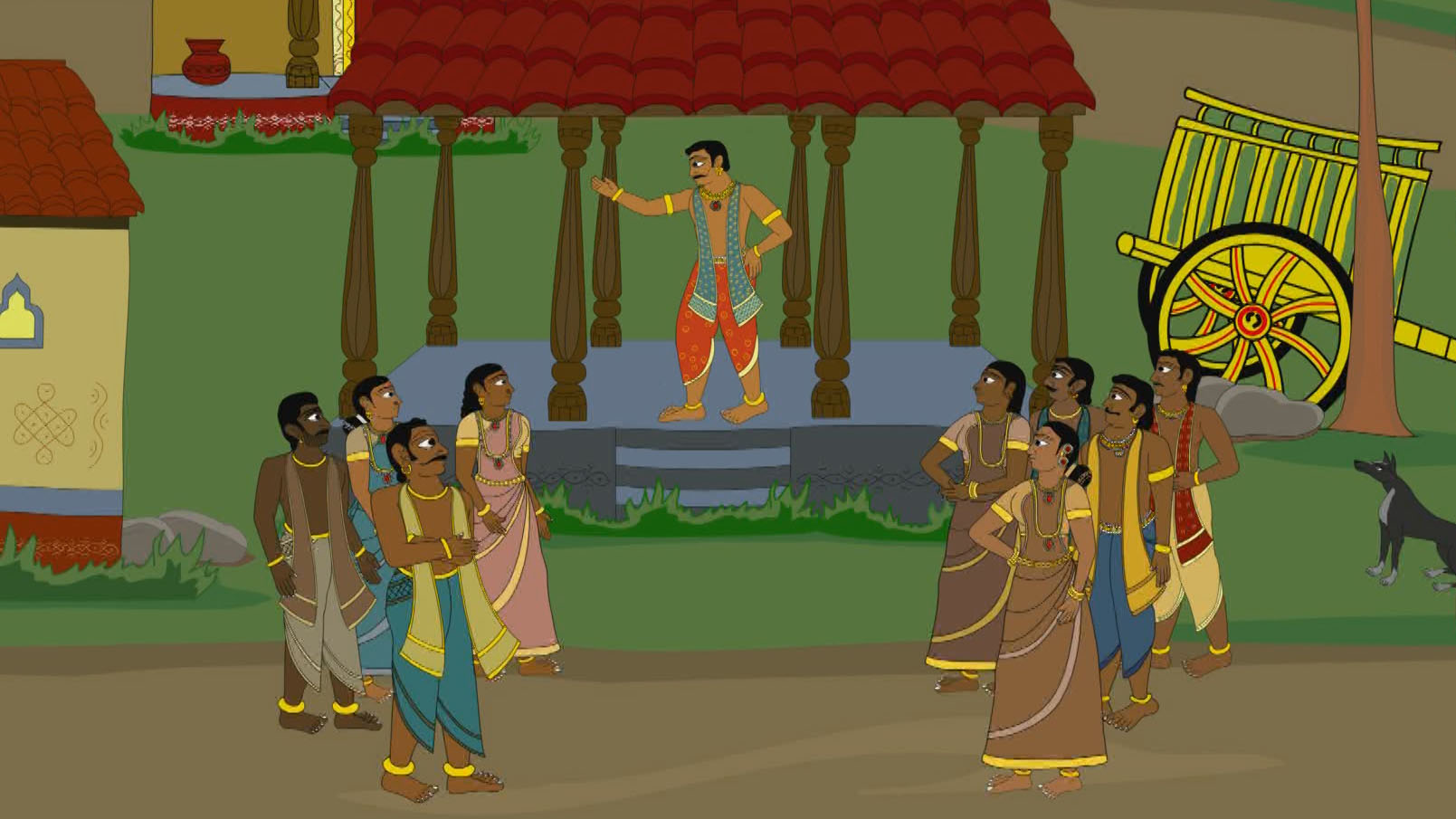 Wealthy landowners are minor kings who rule over workers and service providers in their own area(s) of control. Here we see the second generation king of Ponnivala (Kunnutaiya) giving advice and settling disputes from a ceremonial dias in the center of the village where his local workers reside. 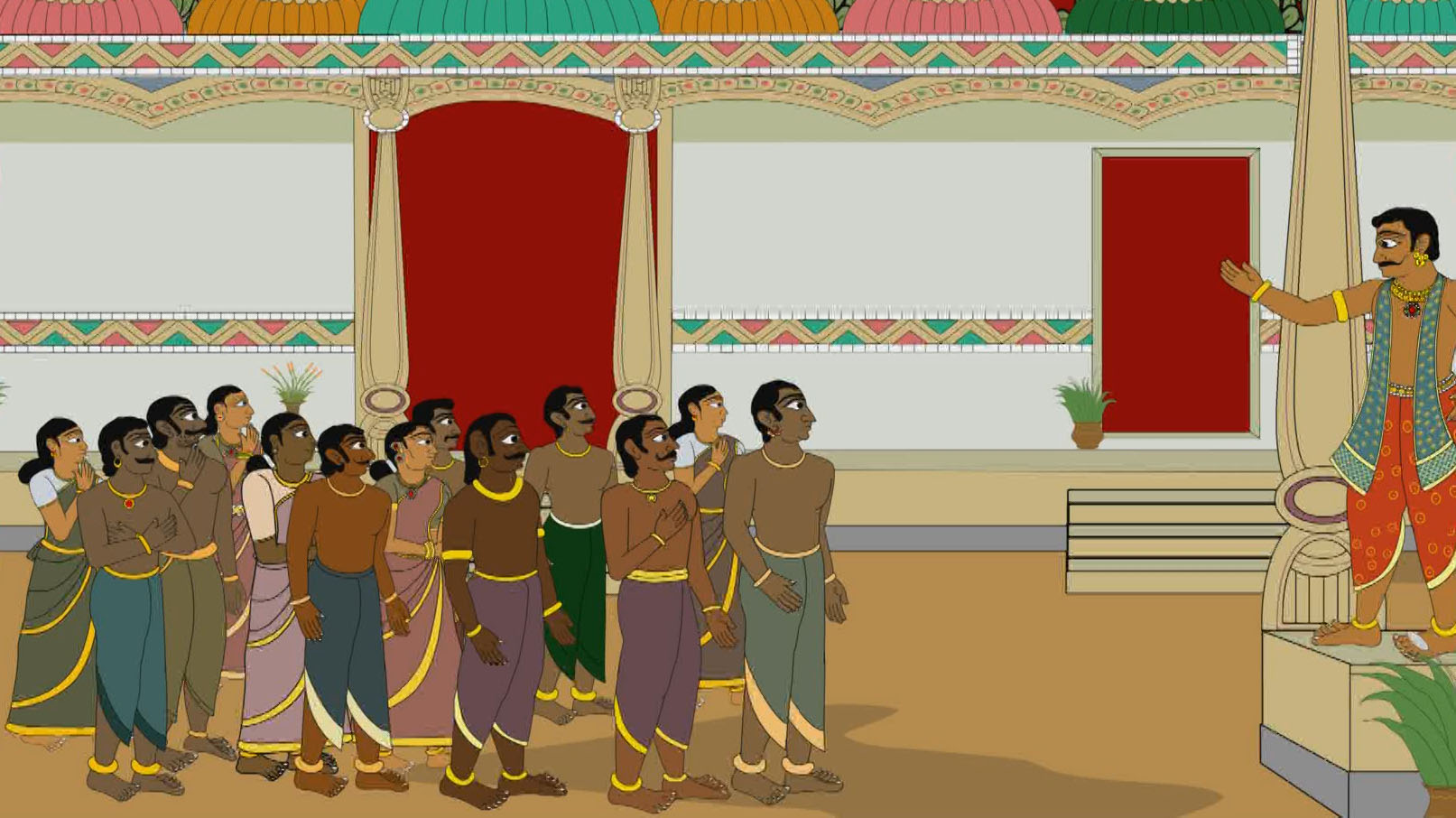 This image shows the king of Ponnivala (Kunnutaiya) giving advice to people from the a raised dias in the courtyard of his own home. He resembles the Chola monarch, but is a recognized leader on a much smaller scale. 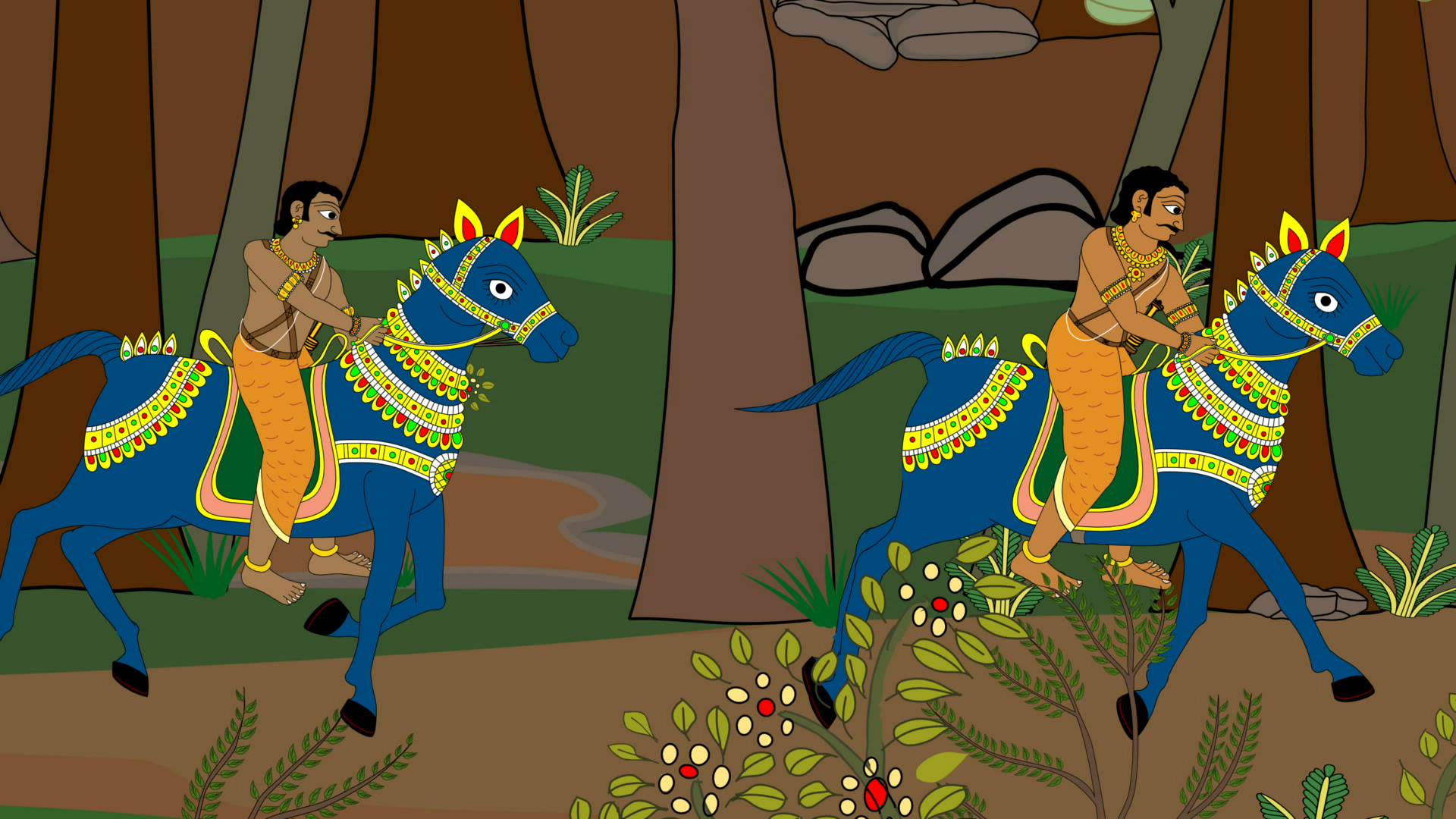 Owning horses and riding is a major symbol of status in this story. There are no chariots but the heroes ride on horseback to most places where they wish to present themselves as leaders and men of status. They also ride horses to major ceremonial events, like their own marriages. 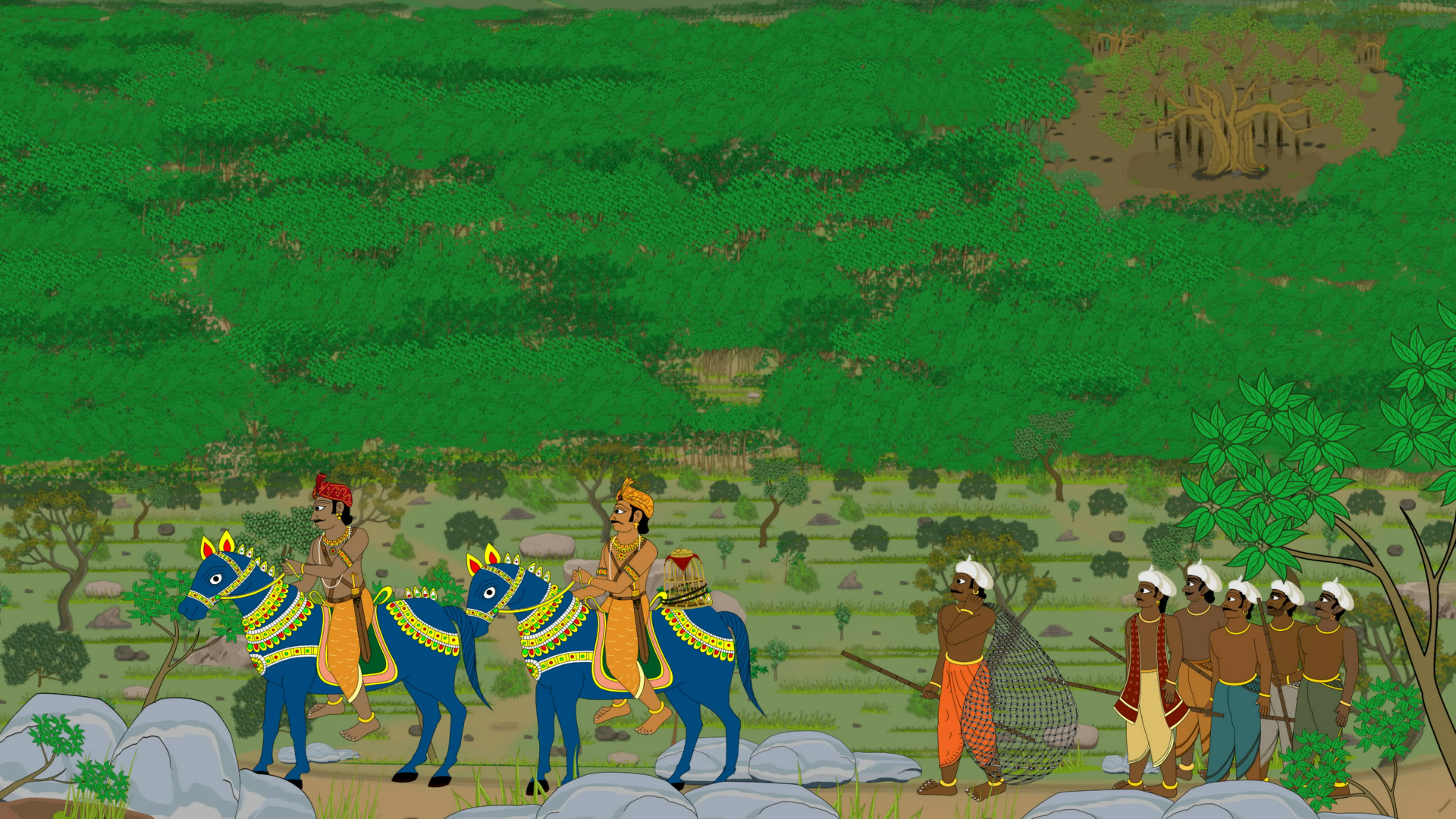 Here we see the two heroes of Ponnivala in the third generation (Ponnar and Shankar) leading a hunt on horseback. All of their assistants in this mission and on foot. So they cannot go very fast on their horses and hope to have these men keep up. The horses are part of this event for status reasons. Their riders are the undisputed leaders of the hunting expedition that has been undertaken. 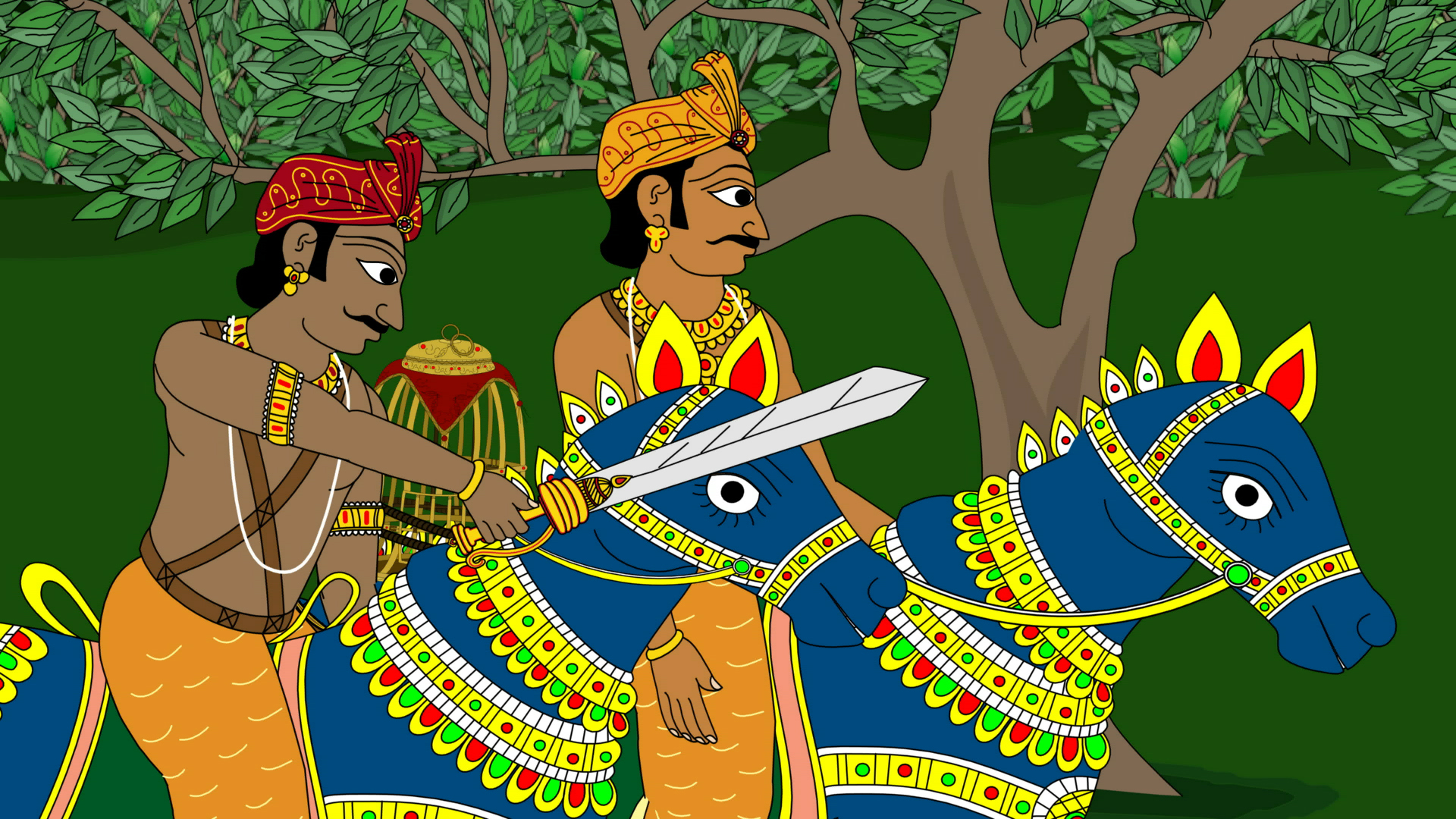 Another sign of leadership is the carrying of a sword. The twin brothers who ruler Ponnivala in the third generation are the only ones to carry swords. They are the only ones who know how to hold and to wield them. When an adversary tries to steal a sword it falls from his hand and cuts him. All others, except these two Ponnivala leaders (and the Chola king) fight with just sticks or spears as their tools.

The Legend of Ponnivala is a masterful tale about tale about leadership.  It explores how different personalities use their recognized positions of power in different ways.  These contrasts make for an excellent classroom discussion material and can be used to explore the twin topics of leadership and political control.  The story resembles India’s great Mahabharata in some ways, and the bard alludes to various connections between these two stories.  However, the Ponnivala tale tells us considerably more about local Indian history and local social norms than does the Mahabharata.  It also describes a considerably later period in Indian history.  Although the links between the two stories are significant, the Ponnivala deserves to be given independent status, a piece of oral literature that  asserts a significantly separate identity.  The Ponnivala legend is most definitely not just a regional variant of that more widely known, ancient, pan-Indian epic.

The story’s preeminent hero is explicitly said to represent a reincarnation of the famous Arjuna figure in the Mahabharata.  Furthermore Ponnivala’s Aruna character is helped in going to war by Lord Vishnu himself.  Furthermore, Vishnu in this story (who is generally addressed as Mayavar or Kanjinatha), could easily been interpreted (towards the end of the story only) as serving the role that Lord Krishna plays as Arjuna’s private charioteer.  Krishna-Vishnu asks the warrior-hero to ”fight just a little bit more,” in both stories.  But from there forward various interesting differences between the two stories appear.  These differences are instructive and suggest ways in which the “Gita” passages that appear in this folk epic diverge significantly from those presented by the pan-Indian Mahabharata legend.