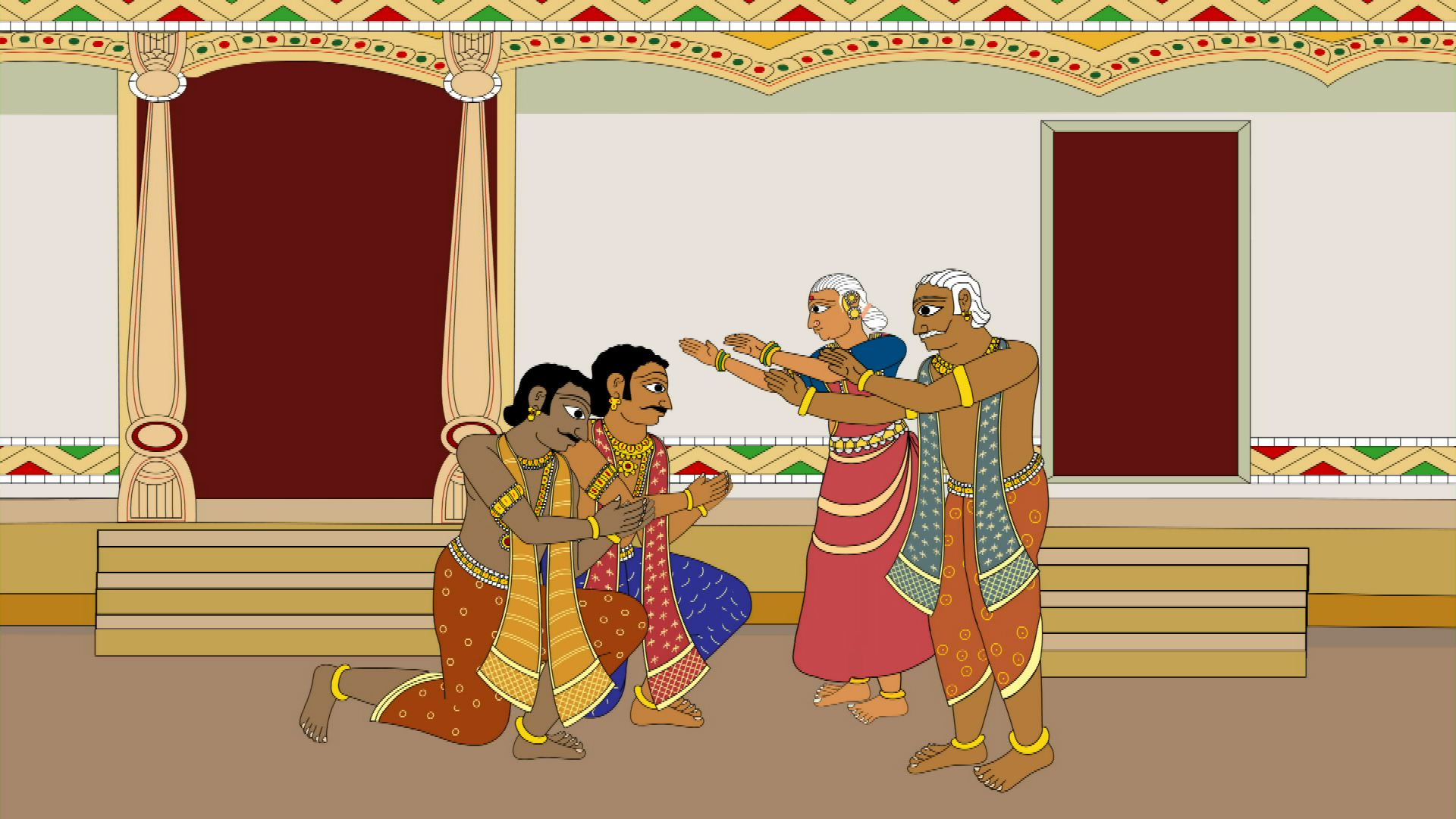 Here we see the two sons of the family in the third generation bowing before their parents who are blessing them shortly before their death. They express a faith in their sons which is not always reciprocated. It is significant that instructions on how to rule the kingdom are given only to the sons. The daughter, though in the house for sure, is nowhere to be seen in this scene that is essentially transferring or bestowing ruler ship on the family’s male heirs. 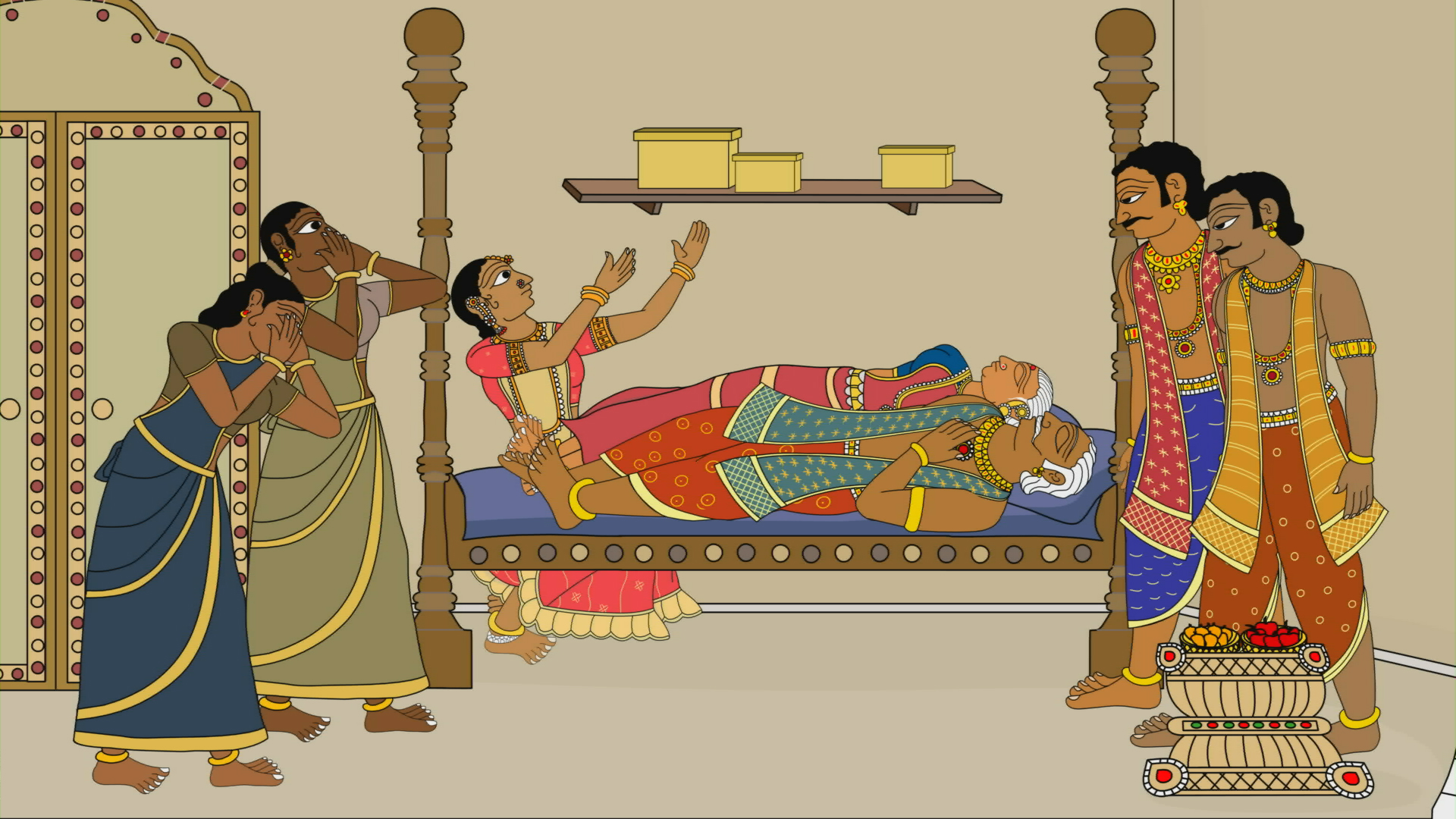 This picture shows the two parents on their death bed. All three children, plus several maids are expressing their grief. Here the family is united in its sorrow, and also leveled in status to some extent, at a moment of crisis. It is significant, of course, that the two sons are standing at the ”head” of the bed while the daughter and the maids are at the foot. 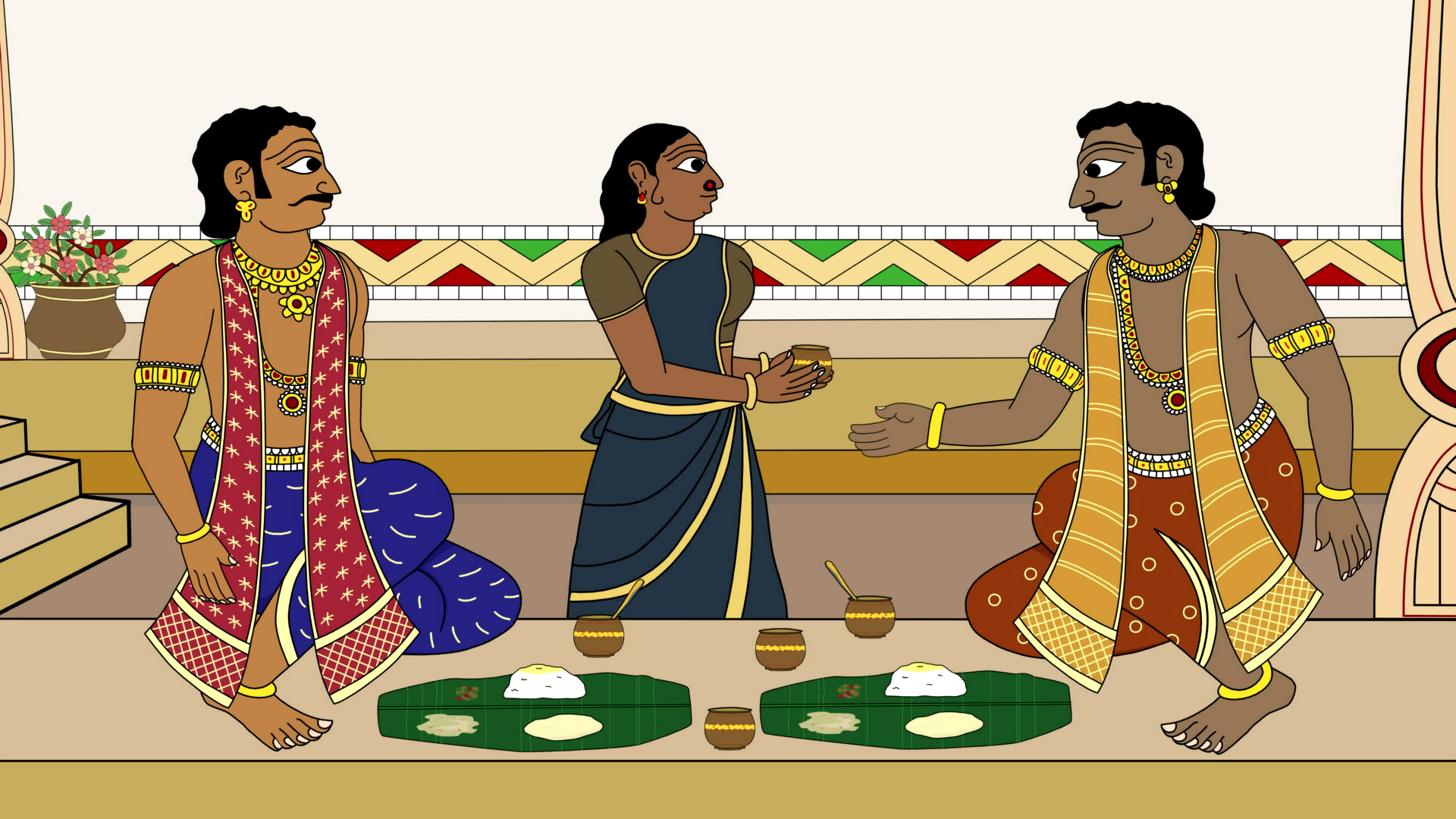 The second key kin bond in the story is between the two brothers. They share the rule of their kingdom after their parents’ deaths. However, some significant differences between these male siblings become noticeable early on. The elder twin is the “formal” ruler honoured in the poet’s songs. His younger and more aggressive brother, on the other hand, is the actual decision maker most of the time. Here the two brothers are seated equally while they eat. The woman in the picture is just a maid who is serving them both. 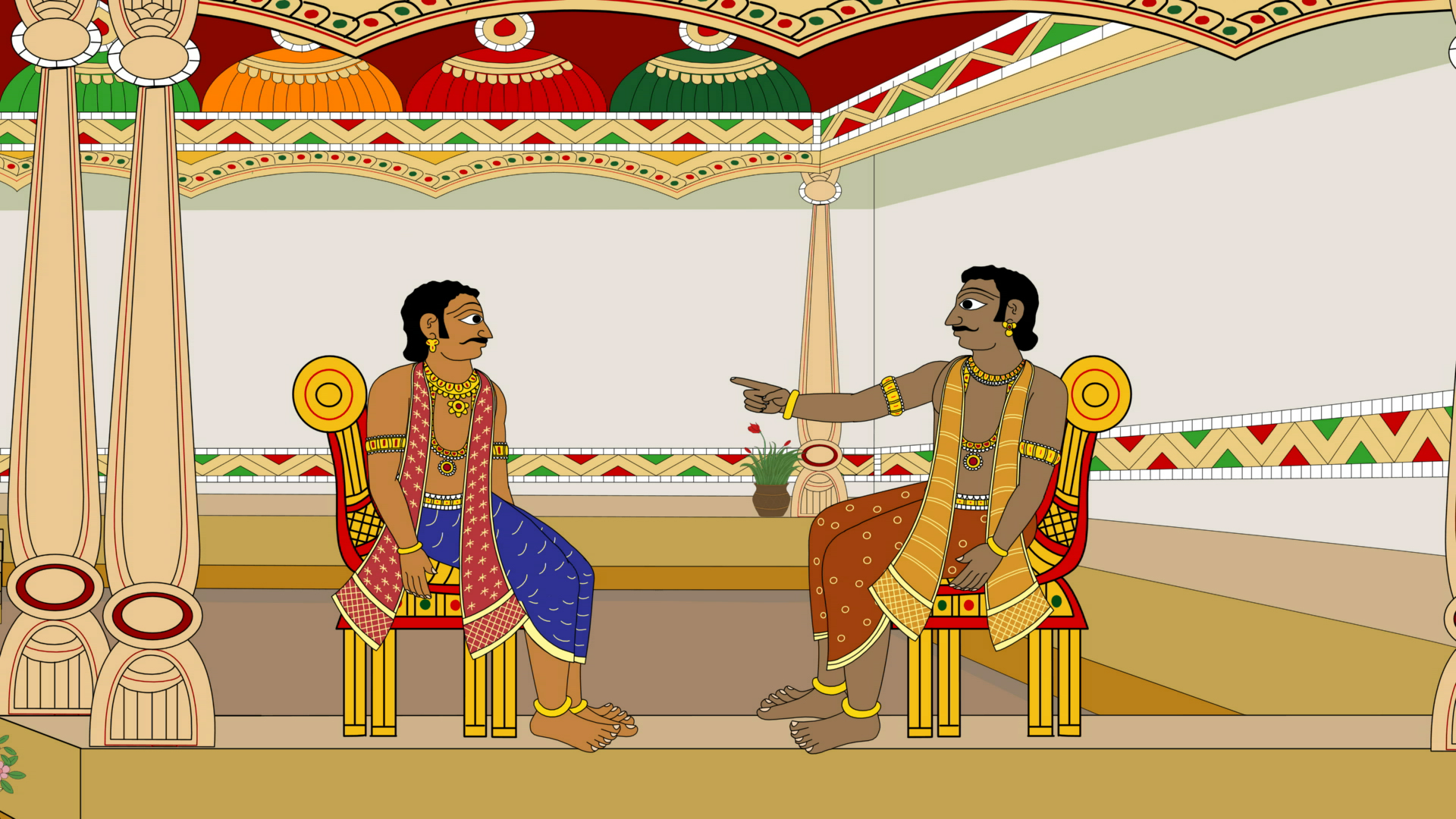 Here the two brothers are seen “in conversation.” But the truth is that the younger twin is accusing his elder of lack of self-confidence and bravery. The younger wants to go “to war” which would mean disobeying their parents instructions, while the elder twin is refusing. There is a significant amount of discord between these two brothers over the style and tone that their joint ruler ship should take. 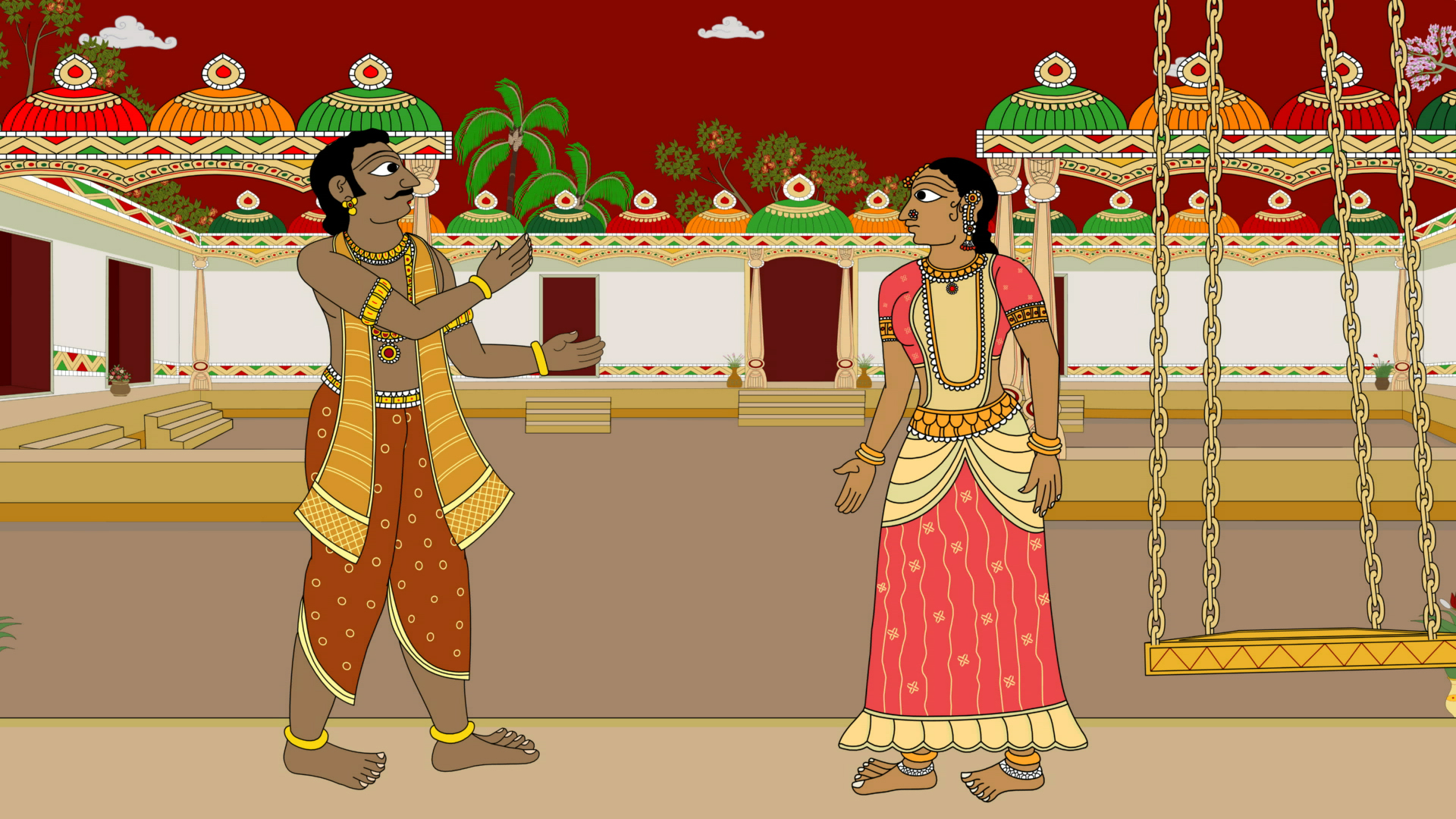 The third In this image important kin relationship in this story is between brother and sister. The younger brother, here, is proposing a dangerous expedition and his sister is expressing her doubts. The sister usually takes a position similar to that of her elder and more gentle brother. The younger brother must dominate them both in order to win his way. 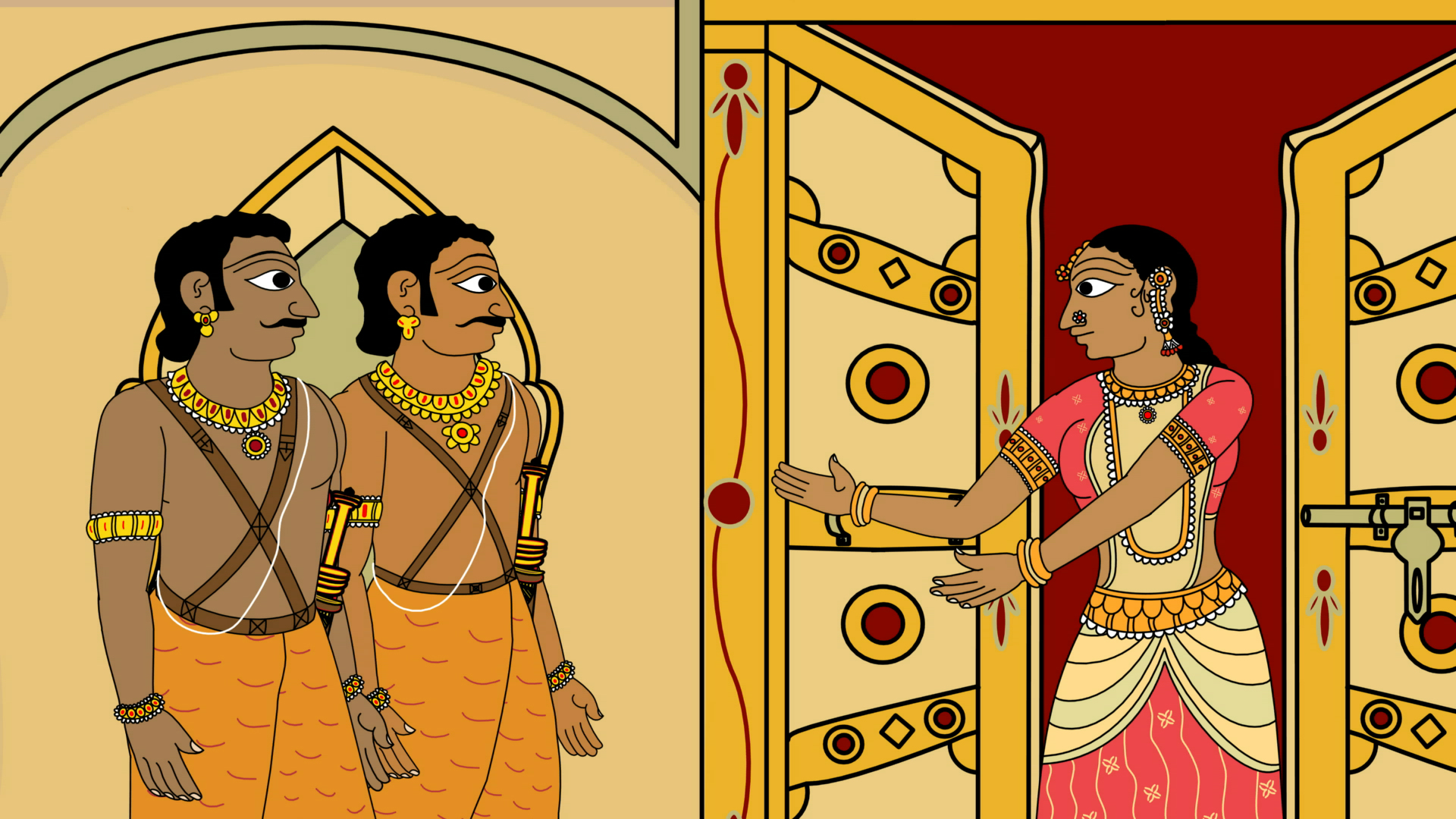 This final image depicts the scene where the twin brothers are leaving for war. The sister is pleading with them both not to go. She can “see” into the future and she tells them directly that she believes they will never return. She is distraught but her brothers, now united in their determination to fight, ignore her pleas.

The Legend of Ponnivala contains many interesting scenes that are essentially about family bonds and family disputes.   The story’s fulcrum rests on the brother-sister relationship.  This is true both in the second generation, where the “mother” of the heroes (Tamarai) has a bitter dispute with her own birth-brothers, and also in the next generation where the younger heroine (Tangal) has a similarly ambivalent relationship with her own twin siblings.  The story Is also deeply concerned with dilemmas surrounding generational succession. In every generation the heroes and heroines worry about who will rule after they depart and whether or not the family’s high standard of living and preeminent social position will persist through the passing generations. We see parents struggle with how to “control” succession by controlling who their children marry.  We see sons and daughters rebel and want to strike out into the world without restrictions.  These topics are “as old as the hills” and can make for a very lively debate over who is right.

There are many ways in which this story illustrates the importance of independent thinking and of self-determination more generally.  A wide variety of episodes can be used to discuss this “independence” theme with students.  Many of the situations faced by various characters compare easily with the challenges posed by the desire for independence in modern life.  It is an issue that people of all ages and both genders must cope with.