The first and foremost identity in the story centers around the beautiful Kaveri river (called Ponni by the poets) and the fertile lands that lie along its banks. Together these create the term Ponnivala. Locals add the word or modifier “nadu” to make up the longer name for the area, Ponnivalanadu. A poetic glass for this would be “The Land of the Golden River.” Ponnivalanadu is a descriptor that makes everyone in the story feel feel proud and joyful. This is “their” beautiful region. 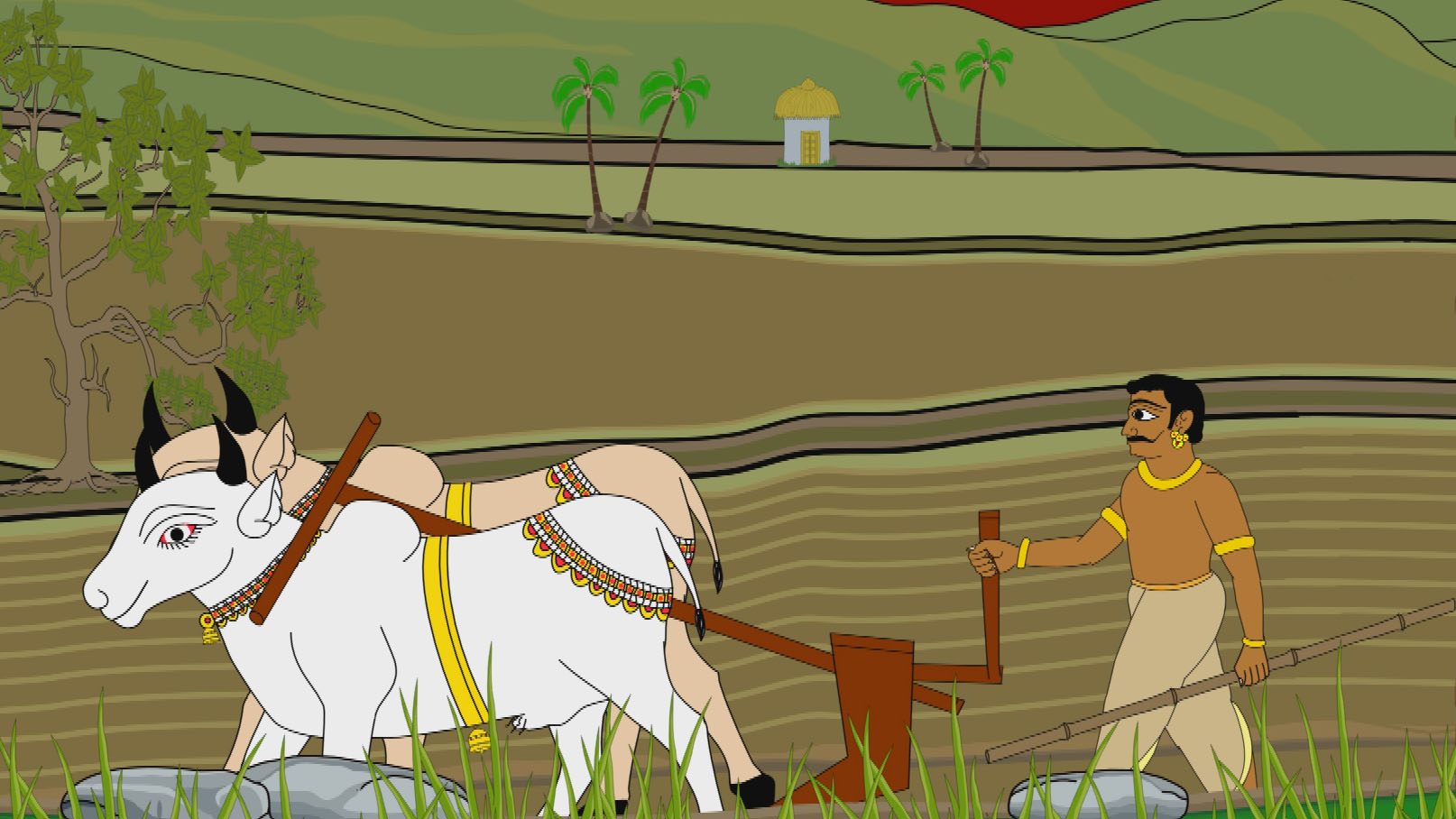 Within Ponnivala there are three main types of production work. The first is the work of farmers. Ploughing the soil is a key symbolic act and something the people who do this strongly, perhaps even fiercely, identity with. 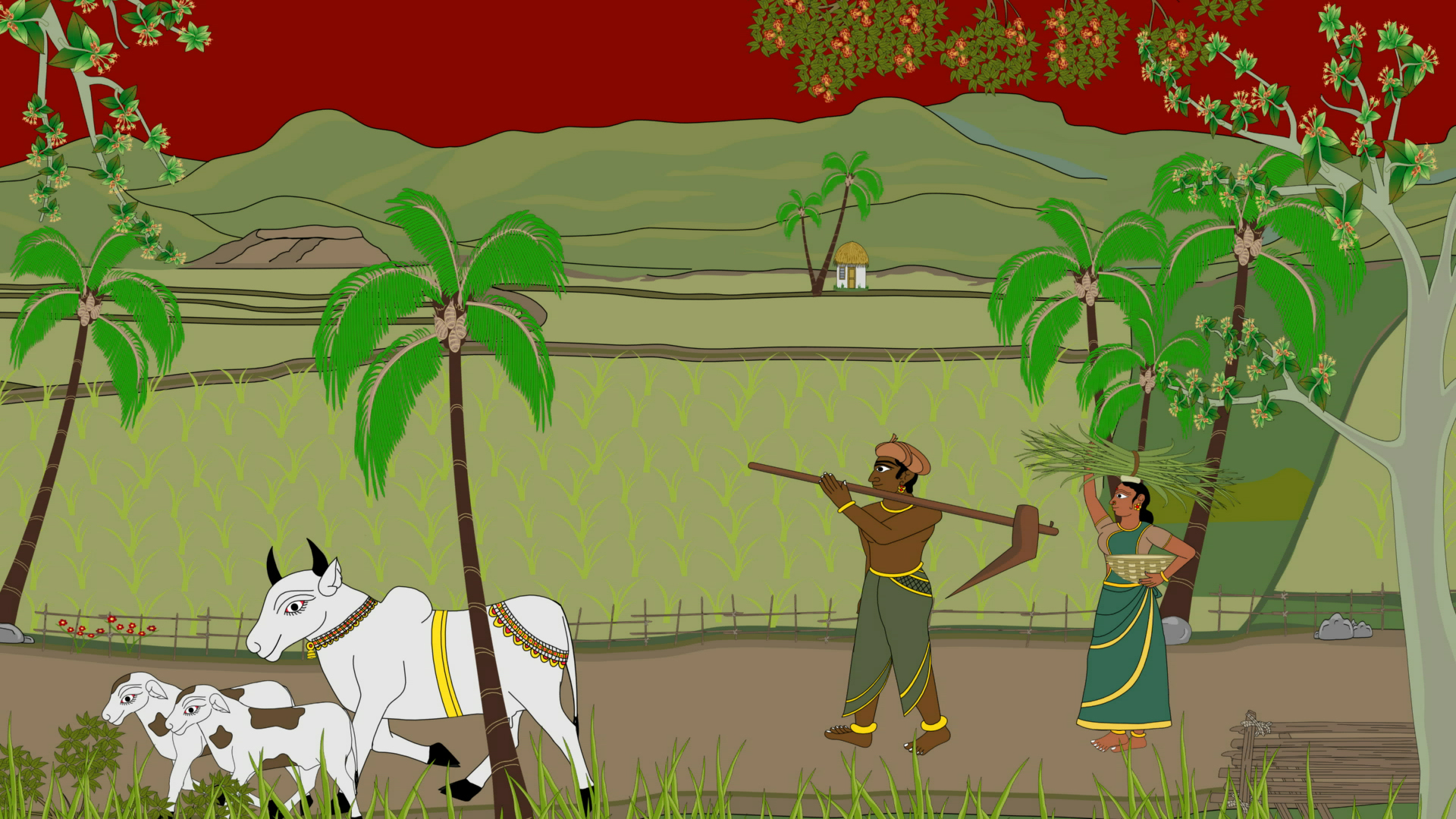 It is not just the act of ploughing that is symbolic. The plough itself is a symbol. The plough in this image is carried proudly by a male. His wife follows him carrying some of the couple’s harvest produce, while a cow her two calves lead the way home. 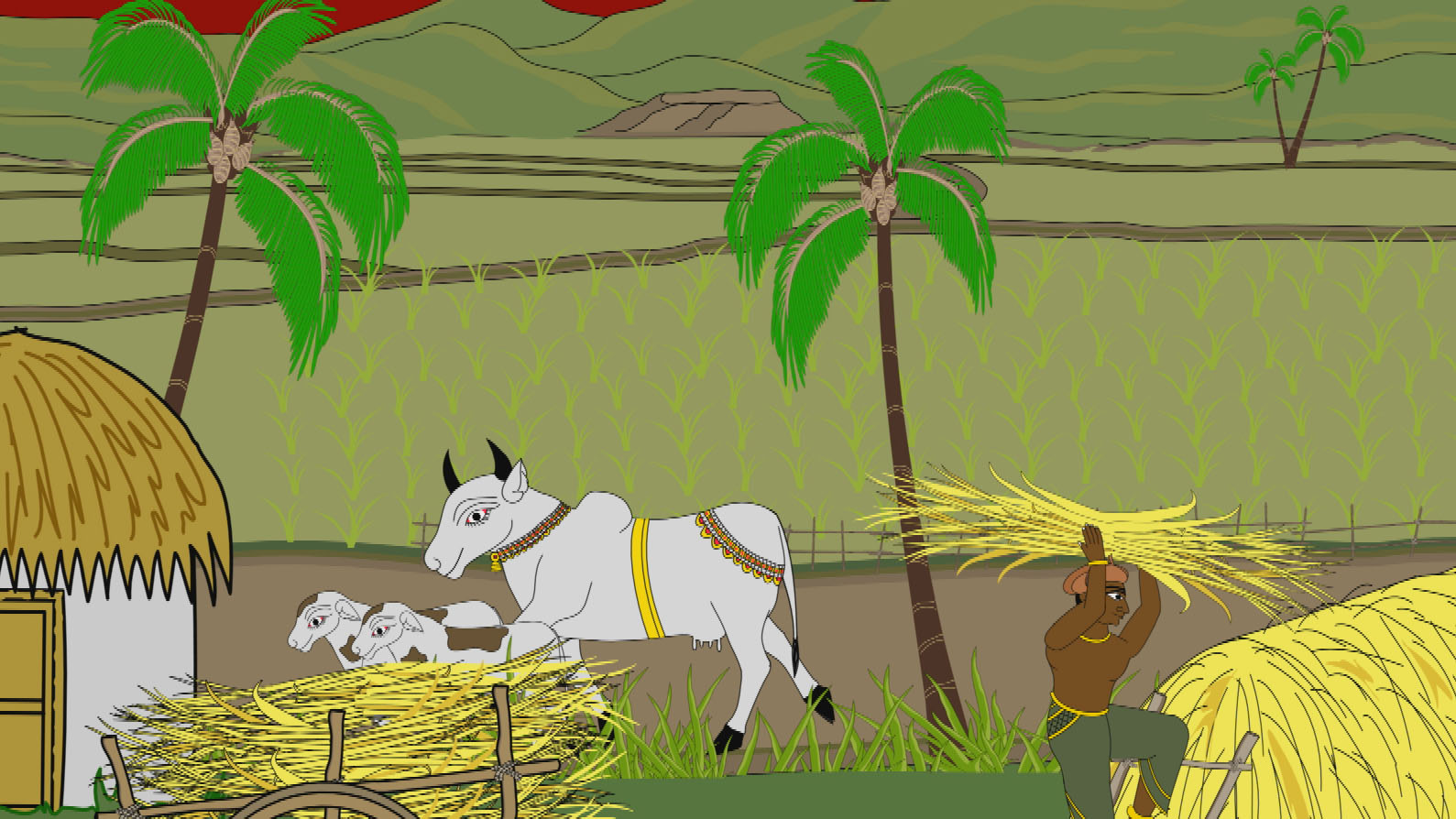 It is not just ploughing that is seen as a key to the farmers’ identity. It is also the amount of produce the hard working farmer can harvest, store and call his own. Cattle are a matter of pride and considered prestigious. So is a generous pile of feed stored up to keep them fat and prosperous during unseasonable droughts or other tough times. 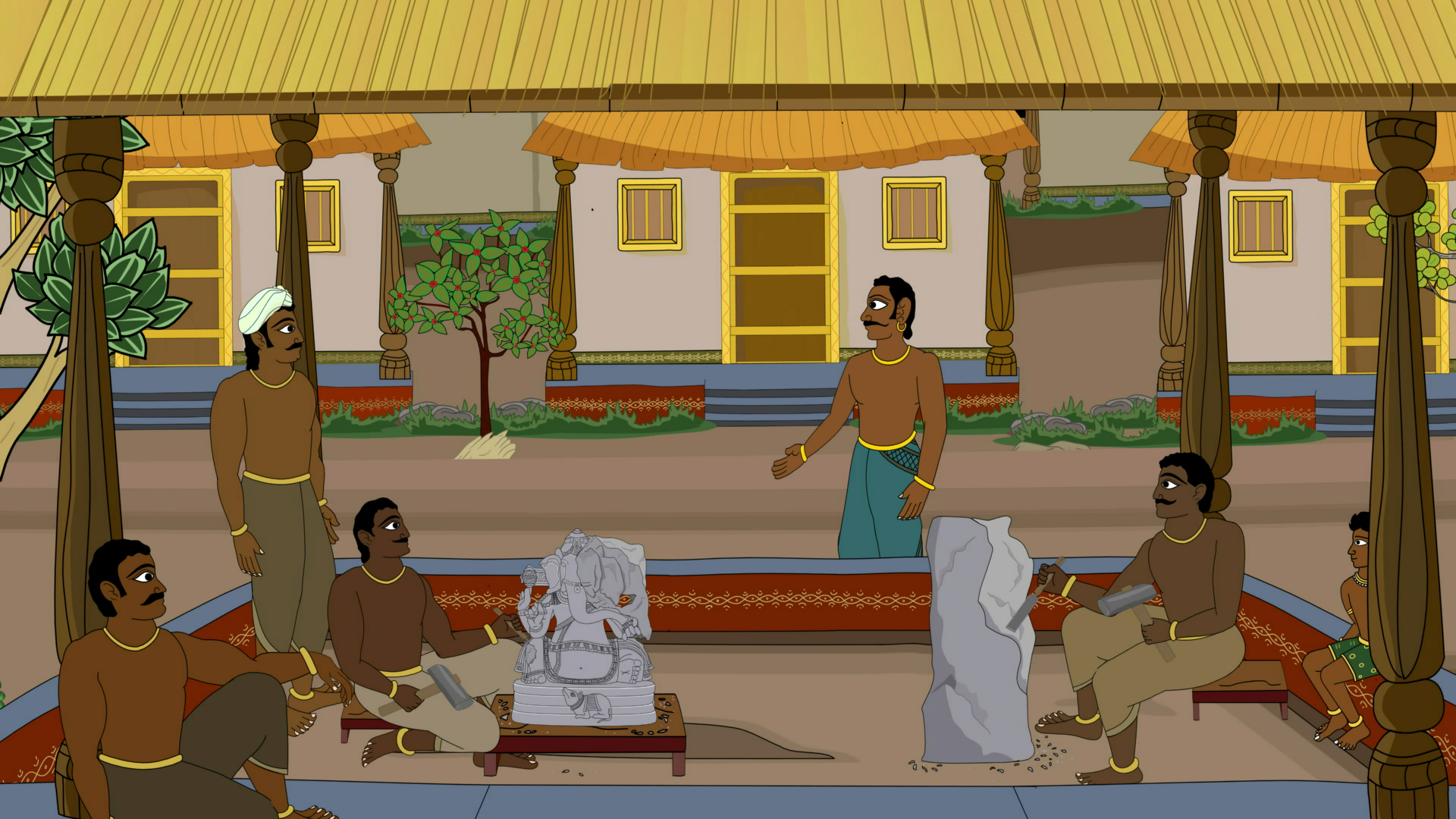 The artisans and craftsmen, by contrast with the farmers, identify with the beautiful things they can make. Here a group of stone cutters show off their artistic work to a possible customer with pride. 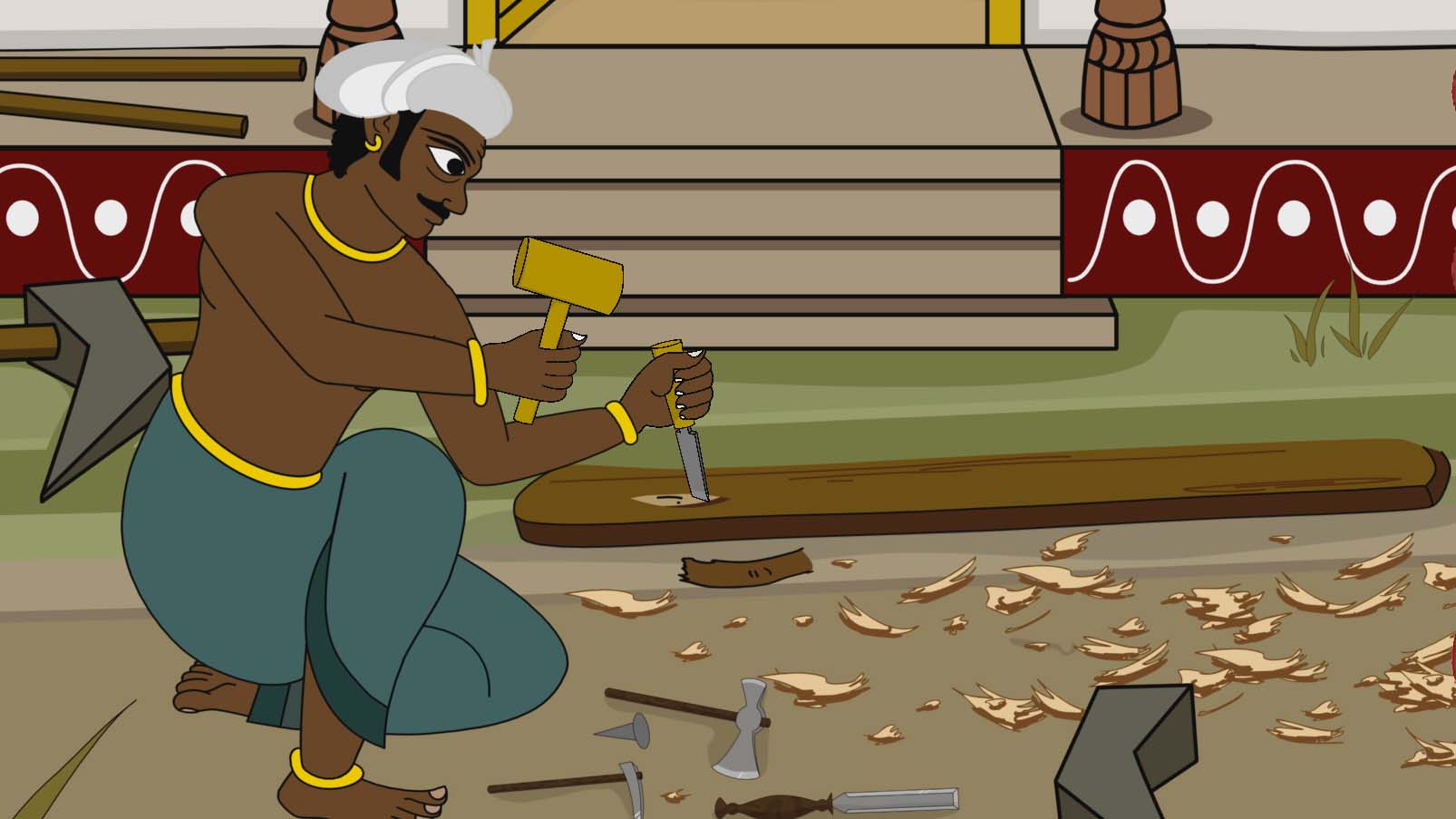 The woodworkers are also important as they make most of the wooden posts and beams for homes, the wheels and bodies of local carts and even the shafts and handles needed for ploughing. They are proud of their important contribution to local life. 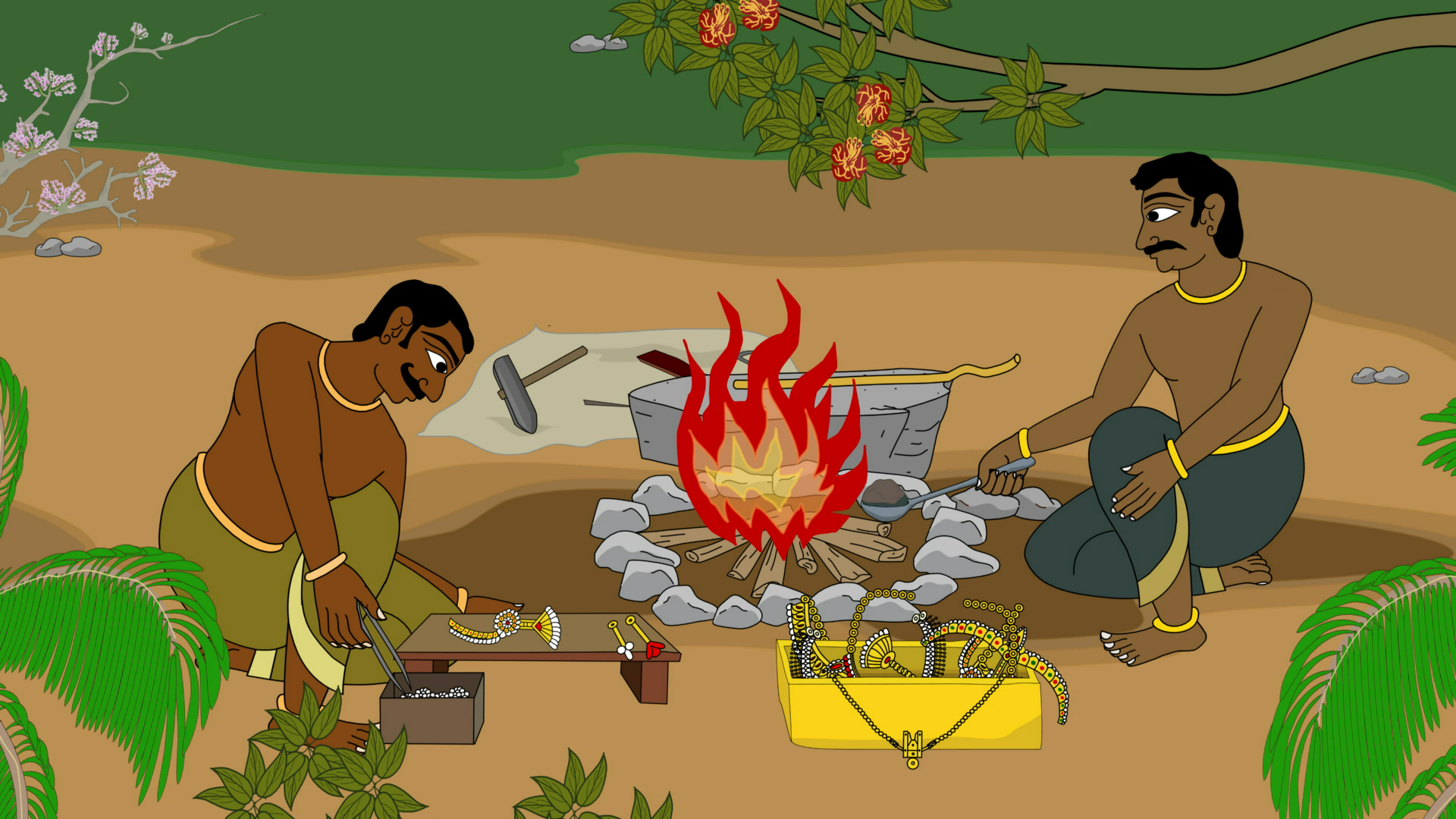 Another important craft is that practiced by goldsmiths. They make the beautiful jewellery required for weddings, and also the crowns and fine necklaces worn by kings. Working with gold is an ancient craft that was practiced and even perfected long before farming with ploughs became common practice. 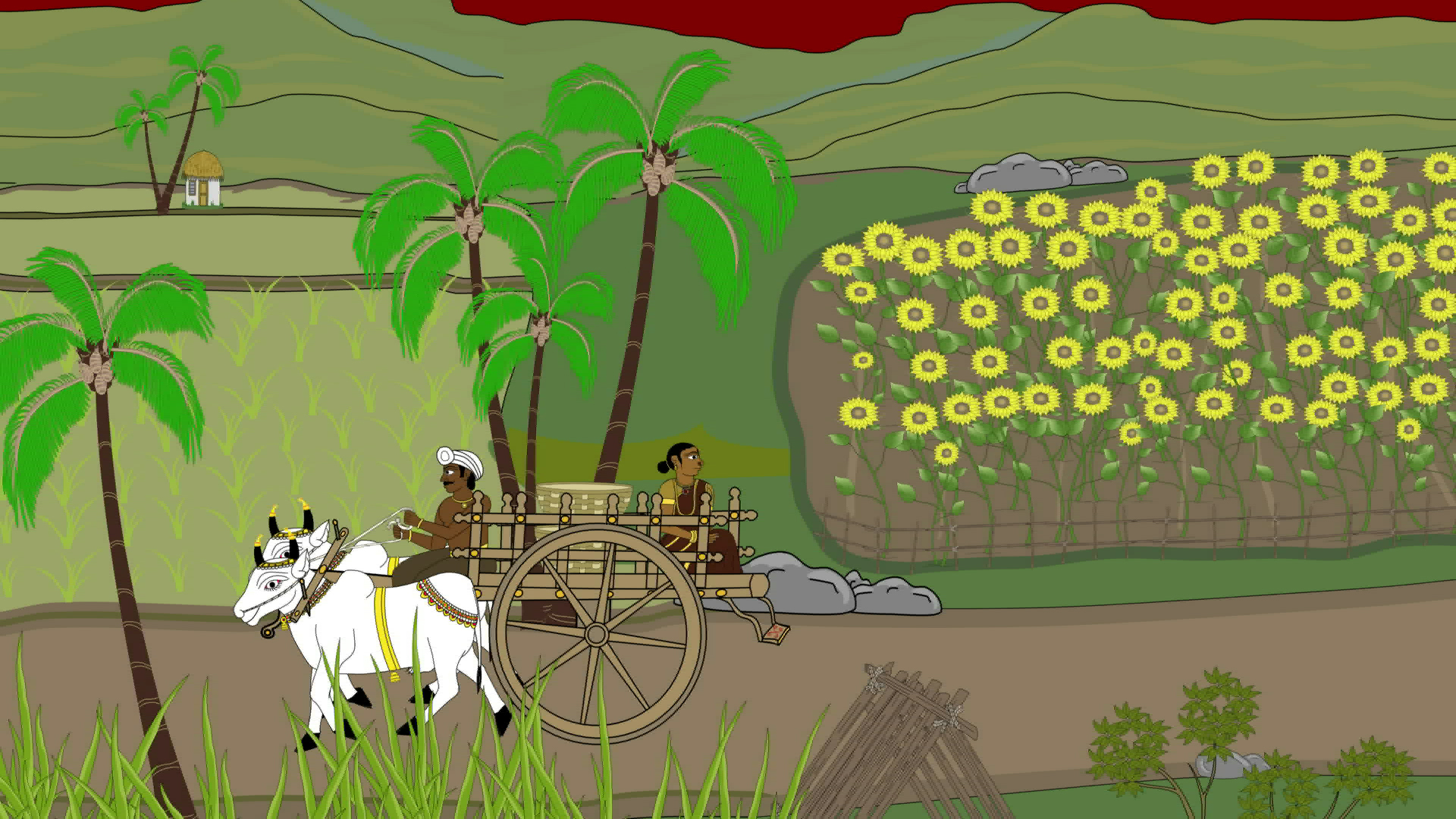 Another ancient occupation is that of the merchant. These were the people who traveled, who know the intricate web of trade routes that criss-crossed Ponnivala, and who carried both goods and knowledge with them. Merchants were definitely present during the historical period that the Legend of Ponnivala describes, but they are not very prominent in the legend itself. We know they were they, however, as there is plenty of independent archaeological evidence as well as other types of records describing them 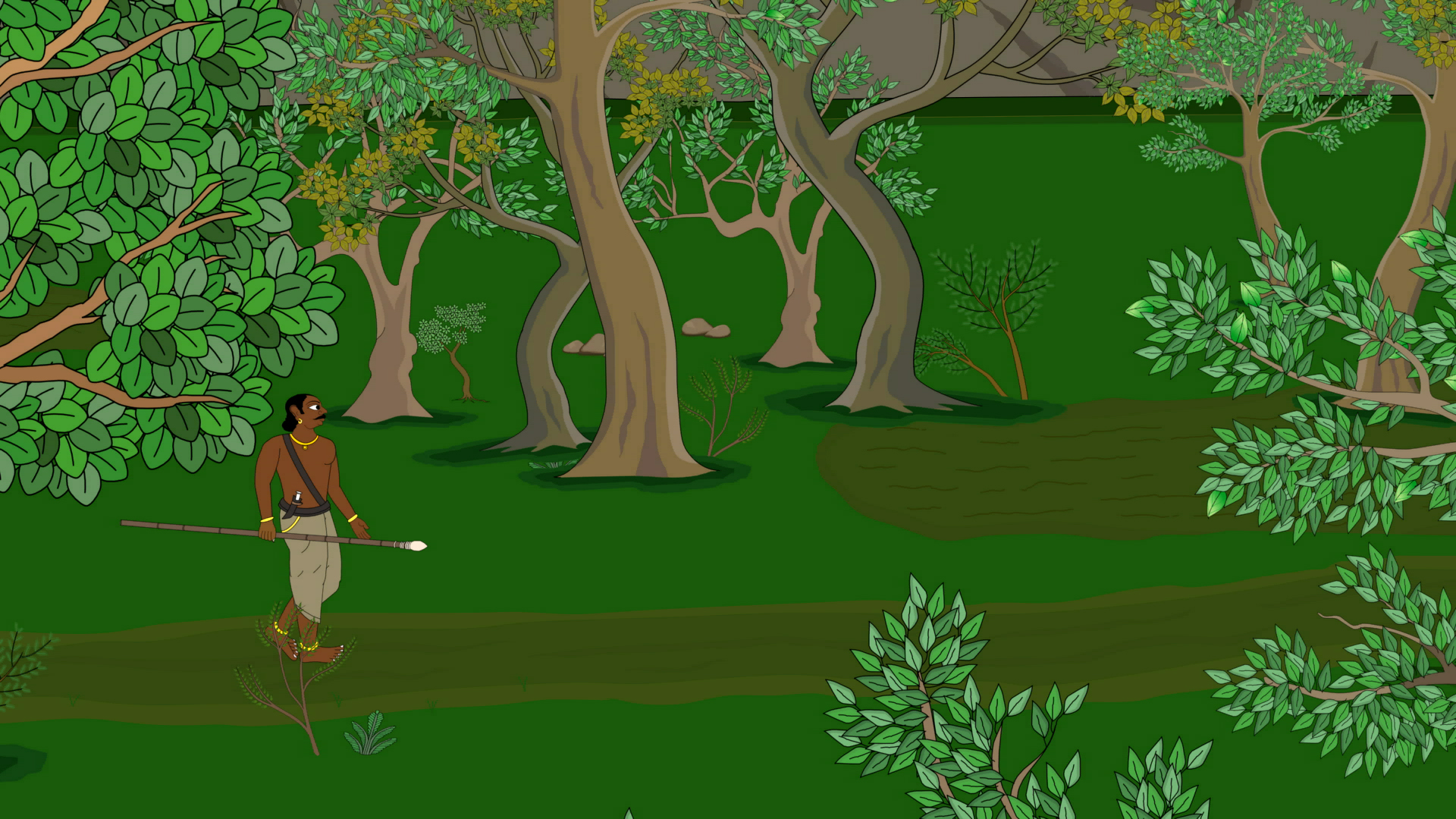 The third and final identity category, in terms of livelihoods, is that of the hunter. This, too, is an ancient skill that has been important to mankind from day one. Hunting became more efficient with the invention of iron and the manufacture of knives and throwing spears. Swords and other iron weapons soon followed. The hunters were the “aboriginal peoples” in the Ponnivala area and they are rightly proud of their ancient heritage and of their many resource gathering skills. 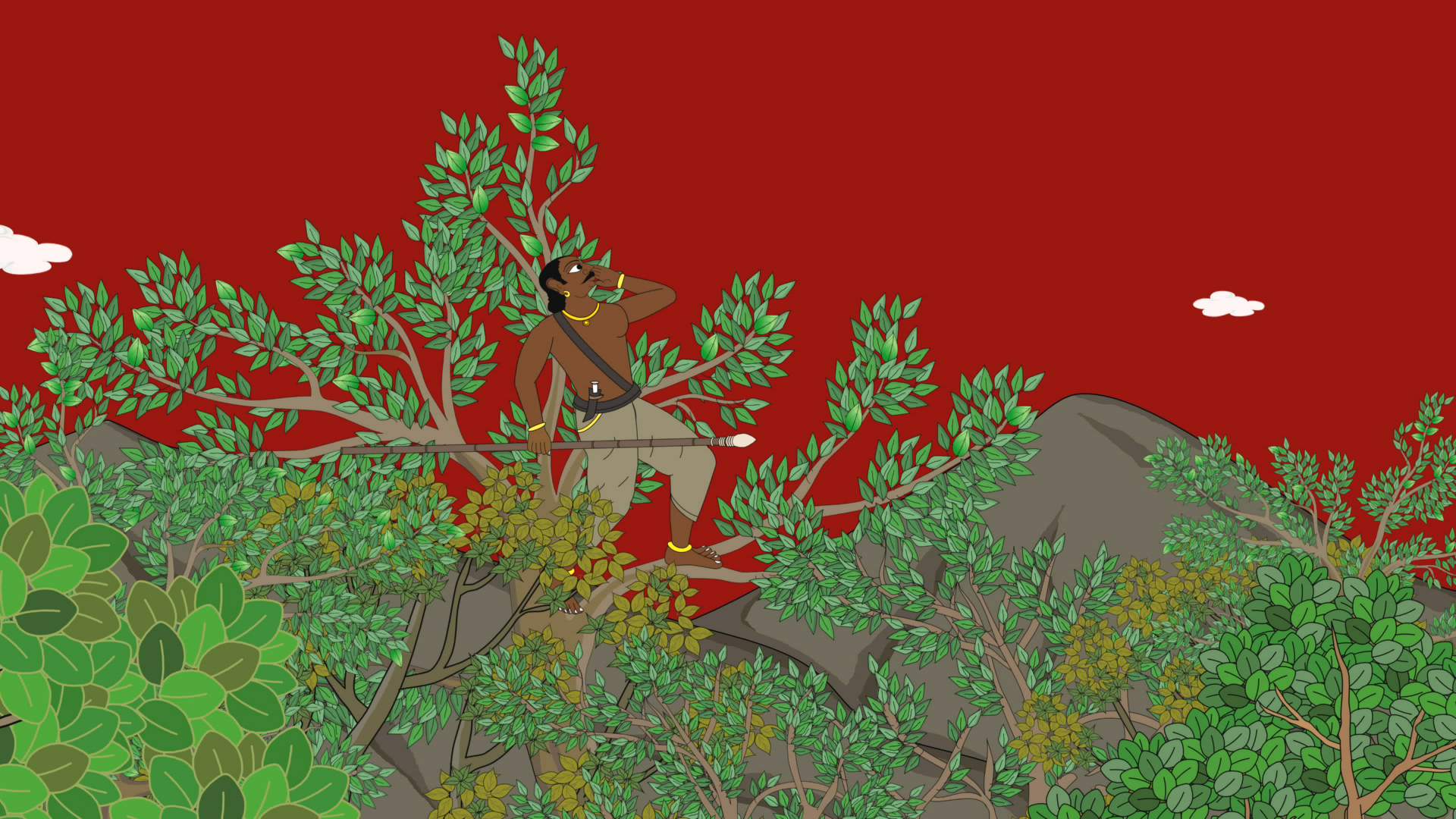 Hunters have many additional abilities. We tend to think of their knowledge of classic hunting tools like nets, spears or the bow and arrow. But hunters are also very skilled at understanding animal habits and even animal “language.” In this image a hunter has climbed a tree in order to call a wild boar out of its lair. He is using a wild boar’s natural grunting sound to do this.

The Ponnivala legend stands side-by-side with declarations of identity expressed in many other epic legends around the world. This sense of “who we are” is part and parcel of the story itself, but it is also an important dimension of how the epic is discussed by people who reference the story in today’s modern “political” world as they discuss and re-tell it.  With “ethnic identity” being a key issue in many countries of the world today, this provides an interesting and relevant approach to studying this complex story.  It is also a story about immigrants, population movements, migration and resettlement... a understudied theme in Indian history.  The same theme, of course, is also very relevant in Canada as a landing place for many different Asian Diasporas.

The Legend of Ponnivala has epic literature status.  This itself is an important aspect of a society’s identity.  We are speaking here of a foundational epic – something similar to an Icelandic saga.  The Legend of Ponnivala  records the identity and early history of the Kongu region of Tamilnadu and of its varied peoples.  It can stand proud and tall as an epic masterpiece as significant as an Icelandic Saga, a story like King Arthur or a Greek epic like the Iliad or the Mesopotamian Gilgamesh. There is a blog, accessible, via the Ponnivala website, that details these similarities.  The story represents what Is basically an ancient oral tradition and it provides a very significant example of the beauty and fresh perspective provided by spoken and sung oral literatures.  For those familiar with Tamil literature, this epic can be used to open an entirely new window on Tamil culture, one that has barely been appreciated or recognized to date.